How does Excel handle composition of functions?

I was trying to use functions to get today's day as a number in Excel. For example, when I wrote this question I should have obtained $18$.

I tried to use:

should give the result I wanted.

in cell A1 and then

in another cell, I obtain the right result.

Why does DAY(TODAY()) not give the expected result?

From my background of mathematician and amateur programmer (in Maple, Java, and some Python), my composition of functions seems fine.

More generally, how does Excel handle composition of formulas?

Your formula is correct; it's the way Excel formats cells that is confusing. For example, if you manually set a cell value to 18 and then change the format to a date, it will display that as January 18, 1900.

If you change the format of the cell with your formula to "General", it should display the result you're expecting.

I think you might be confused in thinking that Excel manipulates 'date' values: It doesn't.

How to use dates and times in Excel

In Excel, numbers are used to represent dates (the possibly-fractional number of days since 0-Jan-1900), but they are stored and manipulated by Excel as numbers. TODAY() is a number-valued function, and DAY() is a function from a numeric argument to a numeric result.

In your case, DAY(TODAY()) correctly returned 18 (a number) which I imagine you assigned to a cell that is formatted to show a date in short form - so that 18 displays as 18/01/1900. Because to Excel, when 18 is interpreted as a date, that's what it means.

If you format that cell to a numeric format, you'll see the answer displayed in the way you expected i.e. 18.

Nothing is wrong with your Formula. What I would like to suggest you, if the Formula doesn't produces the expected result then it either produces Error or the Wrong result. Since you have not mentioned what the Formula does have cook !.

Meanwhile I would like to show you what are the possibilities to get DAY value in Number in Excel.

Check the Screen Shot below. 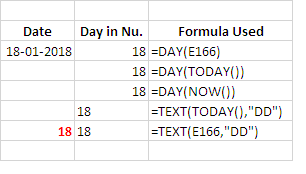 Date is in Cell E166. 2nd Column F has results and the 3rd Column G shows the Formula I've used for.

You can also ues the TEXT function to get the Day value as Text data.

The Value is RED Colour has Custom Cell format DD, you can apply on the Cell(S) to show only the Day values of the Date(S).

Note, I've suggested you all the possibilities since you have mentioned that basically you are not a Excel user.

Hope this help you, don't forget to post the ERROR your Formula has given.

Your formula is composed correctly. The unexpected result is due to how different types of data are stored by Excel.

There are two similar systems that Excel uses for storing dates, based on a workbook level setting.

These excerpts have been taken from: https://support.microsoft.com/en-us/help/214330/differences-between-the-1900-and-the-1904-date-system-in-excel

The serial number is a simple running count of the number of dates since January 1st, 1900, including the fictitious date February 29th, 1900. The DAY function, however, can additionally be thought of as a data type conversion function. It takes a date serial number as an input and returns an integer as an output. In your example, if we think of 18 as representing a date serial, and count 18 days forwards from January 1st, 1900, we end up with January 18th, 1900.

The simple fix on the front end is to change your cell format to something else like Number or General. This will tell Excel to display it to you as an integer, rather than trying to interpret it as a date serial. On the back end, everything is good to go. The integer result can be used in any other formula and will behave correctly.

As an example, lets say we wanted to create a conditional formula which told us whether or not the 15th has passed in the current month. We can do this using:

It would be much more difficult to accomplish the same result using a date serial, so the DAY function returning an integer ends up being more useful within the context of Excel's common use cases.

1
Excel macro date parser cannot handle single-digit days
1
Calculate dates and return a 0 if it is the current date or date passed in Excel 2010
0
macro for replacing text with hard returns in Excel
1
How to prevent Excel from display a formula's result until another cell is populated?
0
Excel array functions -- how to count non-blank cells over multiple worksheets?
2
how to use NOW or TODAY, but freeze the cell with its value
2
Excel formula that returns address of cell's immediate precedent?
1
IF < TODAY(), >TODAY(), =TODAY(), three different conditions in same cell for different results
1
What Excel function constructs and returns a reference to a range of cells?