Is it a good idea to disable "write caching on the device" in windows 7?

Is it a good idea to disable "write caching on the device" in windows 7?

Right now write caching is enabled (which was apparently the default). 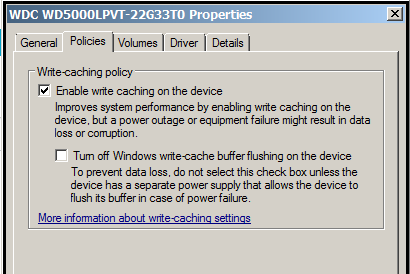 I am working on a 90 pound weakling, a small Acer laptop (not a netbook).

Of course, I want everything! I want speed and I want security. I recently experienced a speed improvement by switching from firefox to opera but occasionally the laptop gets confused when running browser + thunderbird + MS Word + foxit (pdf viewer) + notepad++, and then I start having to close things (but sometimes the laptop is so confused it doesn't even know how to close things any more and I have to restart).

Happy to provide additional information, just tell me what else I should add, thanks.

Note, I found a related question but it concerns the second check box in this dialog box. My question today is about he first check box.

This particular tickbox is not talking about OS level write caching.

It's for drive level write caching. Drives have ram and can do caching at the drive level. This can cause issues if the OS isn't aware. Most disks ship with it off and allow the OS to enable it if they want/are aware.

What do I mean by aware? Most filesystems support the idea of "Barriers". That is a point where you have to have flushed to disk all the cached data before you can proceed.

Windows supports issuing barriers, so enabling drive write caching will be less of an issue. You can still lose data BUT you shouldn't irreparably damage your filesystem.

Anyway, this is usually safe as Windows is pretty aggressive about flushing. The second tick box disables explicit flushing. This is bad. It CAN and WILL cause filesystem corruption. Not just losing a bit of a word document or something.

Keep in mind that writing to disk is slow, so "write caching" buffers data in memory and only persists it to disk after a timeout or after a buffer is full. This is probably giving you a performance boost, don't disable it unless you know what you are doing.

This improves performance since HDD writes happen in chunks anyway. This may be an oversimplification, but imagine your HDD has a block size of 512 bytes, and you are running a dumb program that tries to write 512 bytes ``byte-by-byte''. This approach will take much longer than one that writes 512 bytes at once. Thus your SO buffers the data for you and performs the single write. The caveat is that if there is a power loss before the write actually happens, then you lose your data. That is what that checkbox is warning you about.

You should open your task manager and check in the resource monitor the disk activity. My guess is that your experiencing one of 2 things (or both):

Swapping happens when you don't have enough memory and your OS uses a special disk file as temporal memory. If your OS has to start moving blocks of memory to disk to free up space for other blocks constantly (this is called swapping), your system seems to hang because writing and reading from disk is much slower that memory.

EDIT: OP pointed to me in the comments that I misread the post. The disk is half full, not almost full. The recommendation to run disk defragmentation still applies, but probably won't do much unless Windows is not running it with enough frequency (since Windows 7 runs it from time to time in the background ). Still, performing a disk defrag and getting more space never hurts ;)

15
Is "Turn Off Windows write-cache buffer flushing" safe on a laptop?
8
Do I need to manually defrag a Windows 7 PC?
0
How do you free up Disk Space on a Windows 7 OS?