How to ask excel to do sequenced formulas in single cell

Here have some information in cell A1.

Then cell B1 has a formula (called "Formula1") to modify A1, resulting in B1 value.

Then cell C1 has a formula (called "Formula2") to modify B1 whose value was created after applying its formula to A1, resulting in C1 value.

Is there a way that I can write a formula which asks him in a single cell to do first formula 1 then formula 2 without needing to write 2 different formulas in different cells?

I tried writing in the formula box like this but it is comparing one to another instead of doing one then the other with the result of the first one:

Also tried =Formula1&Formula2 and =Formula1+Formula2, but they do other things...

How could I write formulas in a single cell saying:

=Formula1 THEN Formula2 THEN Formula3, etc. (each higher formula being done to the result of the former one)

I am having to write column A, Then do formula1 for getting column B, Then again do formula2 on top of column B value after its formula 1 result, for just then to get column C. This is making the excel chart display information that I dont want it to appear nor calculate by parts, but show only final result calculated at once.

I would like to have only columns A and B in which A is the input, and B has all the formulas calculated at once. How do I do one single formula with those 2 formulas to be done first formula1 and then formula2 applied to formula1 result directly? 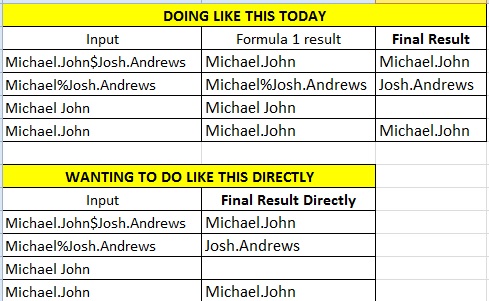 Answer to your original question, "Is there a way that I can write a formula which asks him in a single cell to do first formula 1 then formula 2 without needing to write 2 different formulas in different cells?" - NO, it doesn't exist until the latest releases of Excel 2016.

There are many effective ways of writing formulas is excel, and based upon the examples you have provided, I believe the below should serve your needs

Since you have not actually stated your requirements, I can only assume that you are trying to achieve the below:

Have a go and let us know your thoughts.

Yes, you'll build a complex formula, using substitution of the prior formula's as inputs. Assuming something like:

Since you’ve accepted an answer that doesn’t answer the question you asked, I’ll offer another one.

It would be nice if you explained why you want to do this.  After all, this is such a common technique that we often recommend it in answers here.  If a problem requires a particularly complicated expression, we frequently advise the asker to create a “helper column” to hold an intermediate result.  The final, desired result is then generated using the helper column as input.

Actually, the ability to obtain the formula has existed in Excel for 30 years.

The Excel 4 macro function GET was able to do so, as one of the MANY things it could do, and one used it like one does the better known, nowadays, EVALUATE function.

It's pointless to expand further on that, since FORMULATEXT() now exists.

But for the record, it could be done and easily, for a very, very long time. Perhaps why MS was so very, very long in producing a function like FORMULATEXT()? And similarly, perhaps why MS is so, apparently, resistant to the very obvious need for a simple cell-side formula to convert a text string directly into a formula. Yes, EVALUATE works fine-ish, (emphasis on "-ish"), but it isn't cell-side, and it is difficult, usually, to use inside a formula, due to the indirect way of using it. So no formula snippet tables for instance from which one builds a formula from text snippets and a lookup based upon factors in the data at hand. Therefore, no simple formulas in cells with easy to maintain snippets. (Also, no, INDIRECT() is utterly not something useful for what I describe.)

But Bharat Anand was incorrect in stating it oculd not be done back then. GET function, option 6.

5
Excel: autofill formulas in lists
4
Robust way of creating formulas in Excel
5
How can I turn a Calculated Column back into a data column in an Excel Table?
3
Counting Text Cells
1
How can retrieve cell address that match criteria?
2
Excel - How to return different match values with other formulas?
0
How can I count how much wood a woodchuck chucks using Microsoft Excel?
0
Copy a set of different excel formulas down a column