Can I use other host instead of localhost for Destination Field in SSH Reverse Tunnel Port Forwarding?

I am using Putty to achieve SSH Reverse Tunnel Port Forwarding. Most of the tutorials are teaching me to forward remote port to localhost port. However, may I know is it make sense to input other host such as 192.168.1.132:8081 into the Destination field? 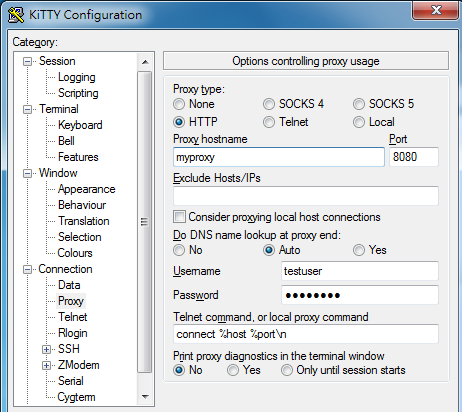 Tunneling config (the Dynamic one is for the Socks5 connection, please just ignore it; the R12345 one is the tunnel that I am playing with): 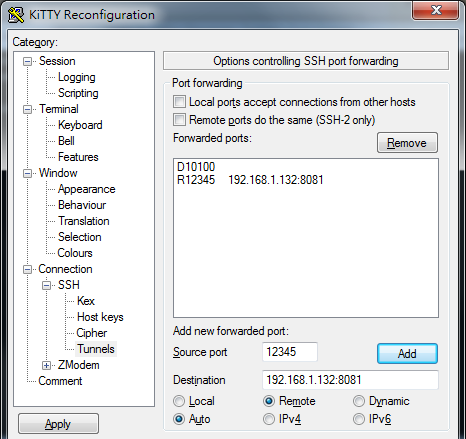 The result that I try to access the tunnel from the Destination (SSH Server): 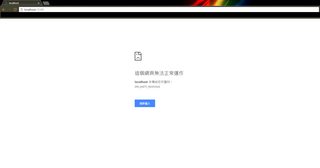 Can anyone help me?

In the device that I am running SSH command, I am going out with via a proxy server. Is that affecting the reverse tunnel behavior?

I have tried to make the reverse tunnel from the http server directly. However, in the SSH server I can visit the website by http://localhost:12345. Attched setting and result at below.

Same, http server needed to go out via my office's http proxy too!

And then I can visit the http server from SSH server via localhost:12345

BUT you need to understand, that this other_host that you will be specifying is at the context of the LAN network of the ssh client. Because the ssh client and the ssh server could be in two different LAN networks.

Then, you better be sure that 192.168.1.69 is pingable from your end (the ssh client). There could be a machine with similar ip address of 192.168.1.69 within terabithia.com's reach in terabithia's network LAN, but that is not the other_host that is being referred to in the above snippet.

Some subtle things to take note of:

Yes, you can do that, but if you don't understand how it works, it is easy to make incorrect assumptions.

Understanding Localhost with Tunnels:
Now, here's the really tricky part that can easily through you for a loop. Normally, when you're on one computer, you think that "localhost" refers to that computer. But, um, no. It is best to think of the "destination" field as text. So after the listener receives traffic, the listener will forward that traffic through the local SSH software, which will encrypt the data and push the traffic through the tunnel. The side that is sending the traffic will also provide the "destination" information. Then the remote SSH software will receive that traffic, and look at what the destination says, and then try to send the traffic there.

So, if you type "localhost" on your client, the text "localhost" gets sent through the SSH tunnel, and it is actually the remote end which will resolve "localhost". So, localhost can easily refer to a different machine than the machine you type the name on.

Can I use other host instead of localhost for Destination Field in SSH Reverse Tunnel Port Forwarding?

Yes, you can put any host you want in the destination host field

For the purposes of this answer I will use the form X:Y:Z, which is how the command line SSH client describes tunnels, where this tunnel:

There are 2 types of tunnels that have a destination set:

For a tunnel defined as X:Y:Z you can treat the traffic as being sent into the client at port X, and the server connecting to host Y on port Z, and forwarding any traffic through.

For a tunnel defined as X:Y:Z you can treat the traffic as being sent into the server at port X, and the client connecting to host Y on port Z, and forwarding any traffic through.

What can you use tunnels for

Local tunnels can be used for:

Remote tunnels can be used for:

If you have specified a proxy then in some cases you need to add the local IP address (192.168.1.132 in this example) to the "excluded hosts/IP address" list in the proxy settings panel. Otherwise the reverse ssh connection going through putty will try to connect to the local IP address using the proxy.

Not the answer you're looking for? Browse other questions tagged ssh port-forwarding putty ssh-tunnel reverse-tunnel or ask your own question.