How to compare two Excel spreadsheets?

Both have the same columns, in the same order, but not the same rows.

I have a spreadsheet with 1,000 rows and 50 columns including a unique ID for each row and personal data (address, phone number, etc.).

I want to compare it with the same base extracted one year ago.

My objective is to know all changes (for example, someone who changed his address).

I tried with spreadsheet (as explained here: Compare two excel files) but it doesn't work because in my "new" file I have new rows, and I have some rows in the old file which are not in the new.

There are two sheets representing my two spreadsheets.

As you can see both have the same columns but:

The orange color is exactly what I want, but in this example I can do it manually: comparing December and January. In the real spreadsheets I cannot do it manually as there are too many changes, data, lines, columns, etc. and I will do this monthly.

There is only one column which can never change: the column A.

It’s convenient that your spreadsheet uses 50 columns, because that means that columns #51, #52, …, are available.  Your problem is fairly easily solved with the use of a “helper column”, which we can put into Column AZ (which is column #52).  I’ll assume that row 1 on each of your sheets contains headers (the words ID, Name, Address, etc.) so you don’t need to compare those (since your columns are in the same order in both sheets).  I’ll also assume that the ID (unique identifier) is in Column A.  (If it isn’t, the answer becomes a little bit more complicated, but still fairly easy.)  In cell AZ2 (the available column, in the first row used for data), enter

listing all the cells from B2 through AX2.  & is the text concatenation operator, so if B2 contains Andy and C2 contains New York, then B2&C2 will evaluate to AndyNew York.  Similarly, the above formula will concatenate all the data for a row (excluding the ID), giving a result that might look something like this:

The formula is long and cumbersome to type, but you only need to do it once (but see the note below before you actually do so).  I showed it going through AX2 because Column AX is column #50.  Naturally, the formula should cover every data column other than ID.  More specifically, it should include every data column that you want to compare.  If you have a column for the person’s age, then that will (automatically?) be different for everybody, every year, and you won’t want that to be reported.  And of course the helper column, which contains the concatenation formula, should be somewhere to the right of the last data column.

Now select cell AZ2, and drag/fill it down through all 1000 rows.  And do this on both worksheets.

Finally, on the sheet where you want the changes to be highlighted (I guess, from what you say, that this is the more recent sheet), select all the cells that you want to be highlighted.  I don’t know whether this is just Column A, or just Column B, or the entire row (i.e., A through AX).  Select these cells on rows 2 through 1000 (or wherever your data might eventually reach), and go into “Conditional Formatting” → “New Rule…”, select “Use a formula to determine which cells to format”, and enter

into the “Format values where this formula is true box”.  This takes the ID value from the current row of the current (“January 2018”) sheet (in cell $A2), searches for it in Column A of the previous (“December 2017”) sheet, gets the concatenated data value from that row and compares it to the concatenated data value on this row.  (Of course AZ is the helper column, 52 is the column number of the helper column, and 1000 is the last row on the “December 2017” sheet that contains data — or somewhat higher; e.g., you could enter 1200 rather than worrying about being exact.)  Then click on “Format” and specify the conditional formatting that you want (e.g., orange fill).

I did an example with only a few rows and only a few data columns, with the helper column in Column H: 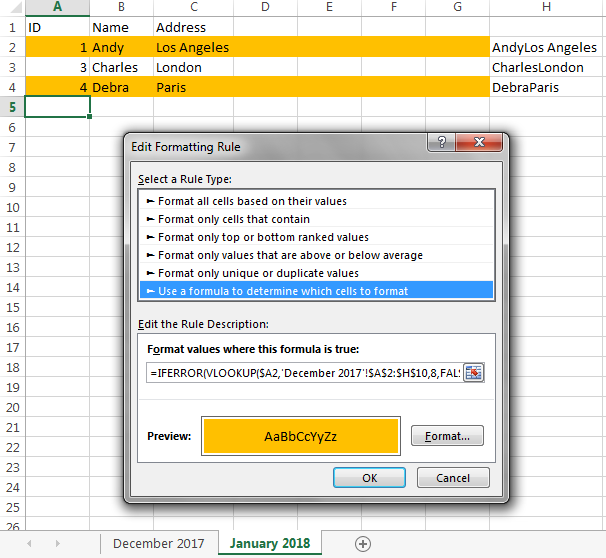 Note:  If a row might have values like the and react in two consecutive columns, and this could change in the following year to there and act, this would not be reported as a difference, because we’re just comparing the concatenated value, and that (thereact) is the same on both sheets.  If you’re concerned about this, pick a character that is unlikely to ever be in your data (e.g., |), and insert it between the fields.  So your helper column would contain

and the change will be reported, because the|react ≠ there|act.  You probably should be concerned about this, but, based on what your columns actually are, you might have reason to be confident that this will never be an issue.

Once you get this working, you can hide the helper columns.

Go to the View tab and click New Window. Go to the new Window and click side by side. You can synchronize scrolling by clicking Synchronous Scrolling. Check the attached image: 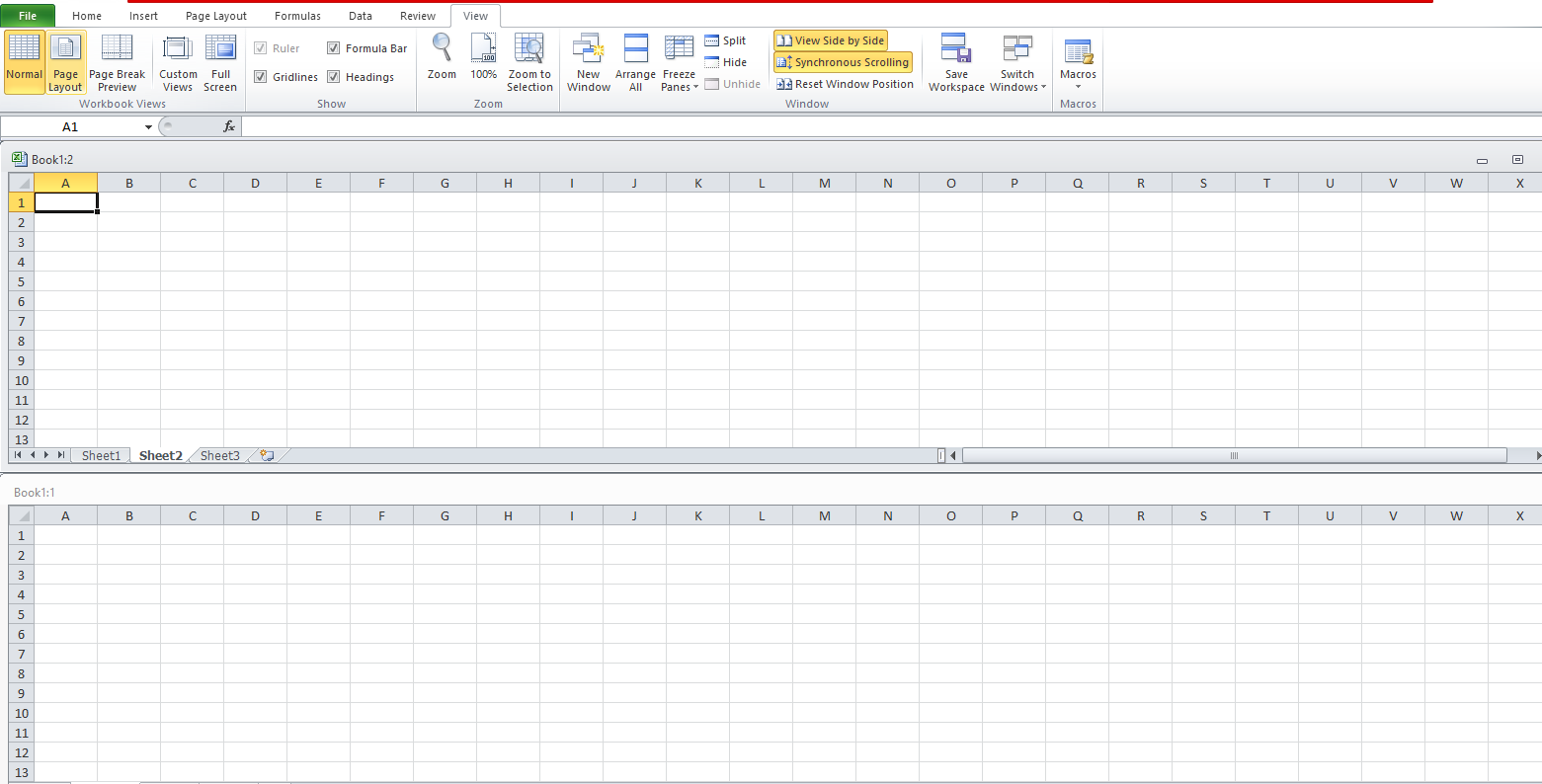 Synchronous Scrolling gives you the advantage of scrolling different worksheets simultaneously. Toggling the button would enable you to view both together and scroll only one worksheet.

Ok so you can do one of two things.

1.- The OOTB solution is to go to "Data"->"Data Tools"->"Delete(This is the direct translation from spanish) Duplicates". In this way you have to append both tables, and you will end up with only the data that has been changed and only uniques. So to filter out use CountIf on your uniqueids, deselect what's been counted as 1. Order by uniqueId and you will clearly see what's been changed.

This formula can be draged to the right and down. So you will get a table with the if condition, with the same quantity of lines as the table of "CellofUniqueID". The position of the "Info Has changed", will tell you what cell in the other table has changed it's content. So use this formula in a new sheet and build a new table. Then look at the filters and deselect "InfoHasNotChanged"(or whatever word you want to use).

Not the answer you're looking for? Browse other questions tagged microsoft-excel worksheet-function spreadsheet or ask your own question.