To get this off the table now and avoid any confusion ... This is for Linux running in Windows 10(ubunutu), also known as WSL. Its not the same as cygwin and windows or stand alone linux. It is it's own beast.

So please keep the above in mind before I am referenced with all the articles I have already read or comment that this has been asked before.

Does anyone know how to make the copy and paste work off of the windows clipboard OR the WSL Ubuntu Linux emulation? I am using set clipboard=unnamedplus. It's not working, not matter what combinations I use like yy, "+yy, etc.

(Edit: Oct 2020) For 2-way clipboard on neovim, I have been using win32yank for several months with no issues. Put win32yank.exe somewhere in your path on Linux (anywhere should be fine), and add the following to your init.vim.

(Original answer) If you just want to yank from VIM to Windows, for WSL2 and Ubuntu 20.04, this answer on Reddit worked perfectly for me with standard VIM and standard WSL2 Ubuntu.

Put the following in your .vimrc (at the bottom, for example):

This solution worked for me, thanks to github user robbiev.

For completion this is an outtake from his answer:

As robbiev mentions you should now also be able to use the Windows clipboard from remote machines using SSH X forwarding.

You can right click the terminal then in the options box check CTRL + SHIFT + C/V for copy paste operations through the terminal. 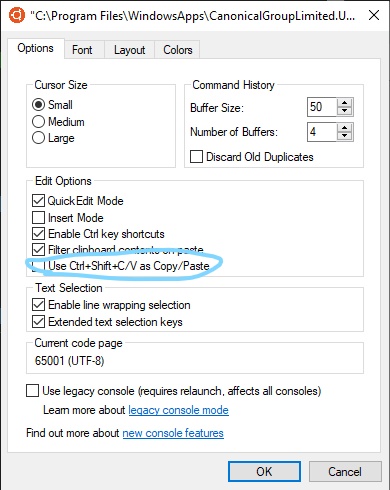 If you have enabled the QuickEdit Mode, you can just select the text with your mouse and right click to copy it into the clipboard.

For enabling the QuickEdit Mode, just right-click on the console windows on top and select Properties (and/or Default), then tick QuickEdit Mode.

EDIT: Out-of-the-box, it is not possible to copy from VIM into Windows clipboard currently. However, on a GitHub-Issue within the WSL repository, some guys seem to have found a way to do that using Xming or VcXsrv respectively: https://github.com/Microsoft/WSL/issues/892#issuecomment-275873108.

A partial solution through ConEmu

Not sure why nobody mentioned ConEmu. It can at minimum handle one-half of the clipboard issue:

Per my use case, I don't tend to copy from WSL a lot; and have been enjoying the pasting-help by ConEmu a lot.

There are lots of quirks with WSL terminal, but using cross Vim copy/paste is top annoyance in my book. Nothing I tried as of April 2018 worked for pasting into Vim or other areas (using normal saneness) so, let's try to bypass the issue, and others related like buffer, for now. This is not a direct WSL solution, rather a workaround using a better terminal + SSH until MS provides a fix.

Putty, or it's extended fork Kitty, offer a more robust terminal compared to WSL. We can connect to the WSL (or any of your other servers) using SSH via localhost, using a custom port, and get a fuller featured terminal, including almost all Vim capabilities for bi-directional, or native pasting, scroll, etc. [You may need to tweak Vim conf to trigger all capabilities].

Putty/Kitty require an SSH server available in WSL, on a custom localhost port. If you haven't set up a localhost SSH server on your WSL already, here's a quick overview of how:

Step 2) Look for "Port" near the first handful of lines. It may be set to 22. We need to set a custom port for our WSL SSH that doesn't collide. Hit i to edit. Let's use port 9977 for example.

Step 3) If you're a dev, or otherwise don't need to bother with keys for your localhost WSL SSH, look for password authentication. You can set PasswordAuthentication yes. Else, keys and higher security, or public access through firewall(s) on WSL, are beyond the scope of this answer.

Step 5) Create a new Putty/Kitty session, connect to localhost, using your custom port (9977 in our example). Log in with your WSL credentials, sudo su if you require root. You should now have a much more robust shell available. Repeat or screen as many views as you need.

I know it's not a direct answer, but at least it's a solution for now :)

You can open wsl distribution from Windows Terminal, then press Ctrl +Shift + V.

If you want, you can get content from the "+" register and then paste with < leader > p

Lots of suggestions for the copy but I couldn't get any working for paste. I just settled for this in my vimrc

If you are using vim(or neovim), maybe you should know ANSI OSC52 that is a standard which trys to solve this "copy/paste" problem(in specific cases, e.g. in a SSH terminal).

Then here's on useful plugin vim-oscyank which implements this standard and what you have to do is just install this plugin and set a keymapping for it. You should definitely give it a try.

You could use xclip or win32yank.exe. For some reason sometimes in WSL1 my clip.exe and win32yank.exe seem to have some runtime error so I am using mainly local xclip with an xserver running. Modified from a few other examples including a neovim clipboard .vim

You could just use top section to add ctrl-c ctrl-x (no ctrl-v yet!) without affecting how vim works aready, or add bottom section to yank to windows clipboard but have delete work normally using vim buffer (so hitting x etc still works quickly and as expected)

Not the answer you're looking for? Browse other questions tagged linux windows-10 vim clipboard windows-subsystem-for-linux or ask your own question.

1
sharing a folder between linux and windows over the internet
1
Use the system clipboard in vim instead of vim's clipboard
11
Xming clipboard only works one way
6
Git fails to launch Vim in Cygwin
29
Editing files in a Windows Subsystem for Linux development environment
2
Running pulseaudio in Windows 10 to get audio output in Windows subsystem for Linux Ubuntu
2
On wsl1, getting clipboard contents using powerhshell changes terminal appearance…?
3
Is anyone else experiencing keys (I am not touching) being sent to WSL 2 gui apps and how should I report it to Microsoft?
1
Enabling clipboard history in windows 10