So My host OS is Windows 7 and the guest is an Ubuntu Server machine. I have connection between the host and the guest, but the guest cannot connect to internet, and I need to have both. I use a laptop with wifi connection and I have disabled Windows7 firewall.

I have configured the Network Adapter as bridged adapter: 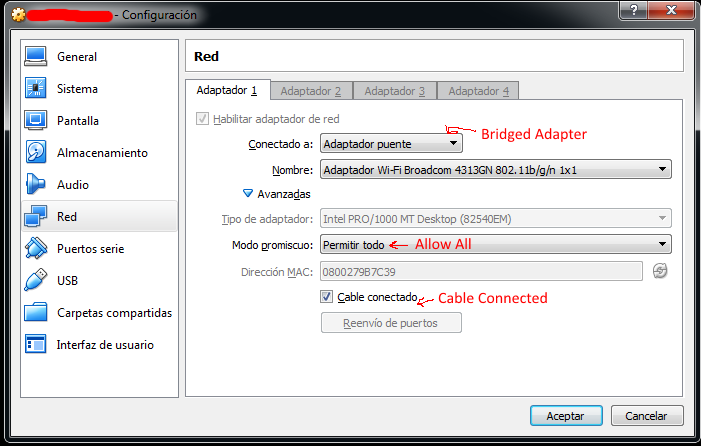 My network adapters configuration is:

I have configured enp0s3 because it appeared when I executed ifconfig -a. eth0 have no use.

run "ifconfig" to get the network details. If you do not see an inet4 address, try running "dhclient" to force a reassignment of inet4 address.

The Bridged mode is for more advanced networking needs such as network simulations and running servers in a guest. When enabled, VirtualBox connects to one of your installed network cards and exchanges network packets directly, circumventing your host operating system's network stack.

Your virtual machine would network-wise be seen as a separate card in the network. For most usages this is not necessary. There might be reasons in your hosts network (outside your influence) for not recognizing or acknowledge your bridged network card.

It is safer (and recommended, unless you have quite special needs) to use NAT mode, which should work out-of-the-box in any networked environment.

Not the answer you're looking for? Browse other questions tagged ubuntu virtualbox or ask your own question.