How are capacitor lifespans measured in hours

I'm looking through the marketing information for my motherboard, and noticed an odd statement regarding the lifespan of their Nichicon 12K Black Caps.

"Supreme 12K black capacitors with lifespans of at least 12,000 hours [emphasis added]. Compared to other counterparts on high-end motherboards that merely have lifespans of around 10,000 hours, ASRock applied Nichicon 12K Black Caps that offer 20% longer lifespans and provide more stability and reliability."

This can't mean that the total powered on time for the PC is expected to be less than a year and a half, can it? It certainly wouldn't be something I'd prominently highlight in my marketing material.

Im not a expert in this area, but look at available info.

lifeactual is the life expectancy at the operating temperature, voltage, and current.

voltageFactor is the derating due to the operating voltage being lower than the maximum rated voltage. According to United Chemi-Con, voltage has far less of an effect than temperature on the lifespan of an Al e-cap (unless the voltage is exceeding the rated maximum)

currentFactor is the derating due to the operating current being lower than the maximum rated current. Current has a more significant effect on Al e-caps than film capacitors because of their higher equivalent series resistance (ESR). The power loss due to the ESR will be equal to I2capRESR and all of this power loss leads to self heating which will affect lifespan.

Calculating the Lifespan of Electrolytic Capacitors with De-Rating

But really, capacitors one of most dying components.

This is an attempt at marketing that fails due to oversimplifying an engineering issue until it actually means the opposite of what it's supposed to mean. And this question is all over the internet...

As explained by the others, capacitor lifetime depends on temperature. I picked a random datasheet (Nichicon R5), this is the "endurance" spec:

This means the manufacturer guarantees that after a number of hours at a specific temperature, the important specs (capacitance and ESR) will not degrade by more than -20% and +50% respectively.

It doesn't mean the cap pops off or stops working completely, it simply degrades. If the application does not require the full performance of the capacitor, then it may work fine for a much longer time. For PC mobos this is not the case, high performance caps are required on CPU VRM, especially ultra low ESR due to the huge ripple currents involved. ESR is equivalent series resistance, and it will increase as the capacitor gets old or if the electrolyte dries out, which makes the capacitor heat more (due to resistive losses) and perform worse at its supply voltage smoothing role.

This is different from the well known "capacitor plague" which was due to a faulty electrolyte formula. In this case the capacitors did not honor their lifetime specifications, they were defective products which are no longer manufactured.

Now, Alu-polymer caps rated for 12k hours at 105°C are very good quality components, some of the best available. Usually you would get 2k hours 105°C caps, so Asrock is selling a good product with dumb marketing.

However it doesn't matter at all. Using the lifetime estimation from Illinois Capacitors that Tim posted, at 60°C (which is already very hot for a mobo, time to clean the dust!) the polymer 2000h/105°C cap would last 40 years already, and the 12000h cap would last two centuries. Temperature has a huge influence!

So, yeah the 12k hour caps are a nice touch but they're a bit of a luxury. 2k hour 105°C caps would still work fine when the computer becomes obsolete and is replaced. Especially since the 60°C temp I used is quite pessimistic, the caps should be much cooler than this unless you run high cpu load 24/7 and the airflow is terrible. So, no planned obsolescence here.

The caps that are accused of "planned obsolescence" and die are usually the ones which are inside consumer electronics power supplies, right next to a very hot heat sink with low airflow, they're run close to max spec and aren't polymer caps but rather low-Z alu electrolytics which are more vulnerable to heat. If the manufacturer puts a crapxon brand 85°C-rated cap in there, yeah it's gonna go "planned obsolescence" pretty quick. Also the caps on the HDMI board in a buddy's AV receiver, all 85°C caps next to a big hot CPU with no fan and no airflow, this receiver is famous for this, all the caps always die. This is more of a design mistake or excessive cost-cut than planned obsolescence though.

This really depends on the type of capacitor, and there are many factors involved.

Each individual type of capacitor is measured differently. 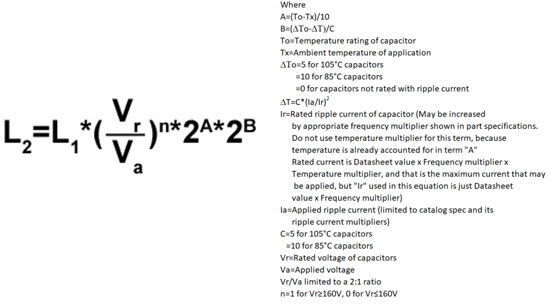 "Planned obsolescence, or built-in obsolescence, in industrial design and economics is a policy of planning or designing a product with an artificially limited useful life, so it will become obsolete (that is, unfashionable or no longer functional) after a certain period of time. The rationale behind the strategy is to generate long-term sales volume by reducing the time between repeat purchases (referred to as "shortening the replacement cycle")."

The company advertising that 12,000 hour rating just may be a case of Planned obsolescence, or built-in obsolescence.

i would want to blame the design engineers, but I am sure it wasn't even their fault. Companies seem to have no shame at all anymore engaging in this behavior, and it doesn't seem to me like a good business plan to advertise you are essentially "shortening the replacement cycle".

I don't know what the specs of those exact capacitors, are but research has shown it is also temperature related.

Its 12k at a specific temperature, and the lower the operating temperature is compared to the rated temperature the longer they will last.

Cheap capacitors can be rated at 50C or less, and good one 70C possibly more. 50C can be a real problem is the case isn't properly ventilated. If you have a house without air conditioning, your case is cramed into a poorly ventilated area, and the air flow incase is bad.

I'm still using it after 10 years as my primary computer, 50% oc'd for over half of its life using core2 duo. Two years ago I updated this LGA775 with a hard mod & O/C'd Xeon quad core 5400 & added a heatsink to the mofsets. Bear in mind that a high quality PSU is CRUCIAL for longevity as well. Last I checked (a couple years ago) you can't get better than Seasonic.

12000hrs at @105°C, translates to 1,188,000hrs at 65°C (135.6 years) using the same scale as the 10 year old P5Q Pro. Other factors may come into play given the the fact these new capacitors are over twice as reliable. Asrock would have done well advertising with a lower temperature as well!

And as a bonus my P5Q Pro comes with Intel ME [major hardware security threat] disabled, and its as easy to disable on the Z370 TaiChi as installing this

8
What are these? Are they broken?
2
What caused a capacitor in the power supply start smelling?
0
Possible capacitor plague - need help identifying
2
Discharging capacitor of laptop
2
SMD capacitor broke off from motherboatd
1
Mouse defect, faulty ceramic capacitor?
0
Capacitor discharge of motherboard
24
Is it safe to use RAM with a damaged capacitor?