I have a regular network share setup on Windows Server 2016.

The objective is to utilize Veeam Linux Agent to Backup this Linux VM to a Windows Share via CIFS.

When I am configuring Veeam to use CIFS, (viewing the logs) veeam is executing this command to connect to the network share:

When I run the command manually, it does the same thing.

It mounts without issue same if I use 2.0 as well.

The problem is, there is no way to force version 3.0 in Veeam. So, I need to be able to force this in Linux some how.

I've seen others have ran into this issue as well, but no solution was presented.

I've attempted the following (based on what I found):

Added the following lines to /etc/samba/smb.conf

I mixed and matched variations with reboots, to no avail.

For a given mount.cifs version, I don't know of a way other than adding vers=3.0 to the command line (or to /etc/fstab). The mount.cifs driver ignores smb.conf. Historically it seems mount.cifs could not auto-negotiate, and simply tried one protocol version - 1.0 until July 2017, and 3.0 after that. (July 2017 being the date of the code change to cifs 4.13, not that earlier versions looked at that date at runtime!) From September 2017 it looks like it can auto-negotiate, defaulting to 2.1 or later (whatever the highest is that the server can offer).

Thus if you can upgrade your version of cifs, you should be able to get a different resulting protocol version even without specifying one explicitly.

Here is the mapping of mount.cifs, smb.conf and Windows protocol versions:

I realize this is quite old, but I was brought here in my search for the same thing: Using veeam (free agent for linux 4.0) on Ubuntu 16.04 to backup to a modern SMB share hosted on Windows Server 2016. Same as the OP, the configuration was failing via the veeam wizard, and also when I would test a mount command, however adding "vers=3.02" to the mount command works (as expected).

This was frustrating because my 18.04 machines connect fine, and from reading it seems that the newer versions of cifs-utils have SMB3 set as the default.

I did find a solution, however. I tried to find the mounting script veeam was using but they don't use any traditional types of scripts you could edit. I decided to try adding the "vers=3.02" option in one of the wizard fields for smb configuration, assuming that it was just taking my input and forming the mount command, and it worked! I added it right behind the username like "entered_username,vers=3.02". 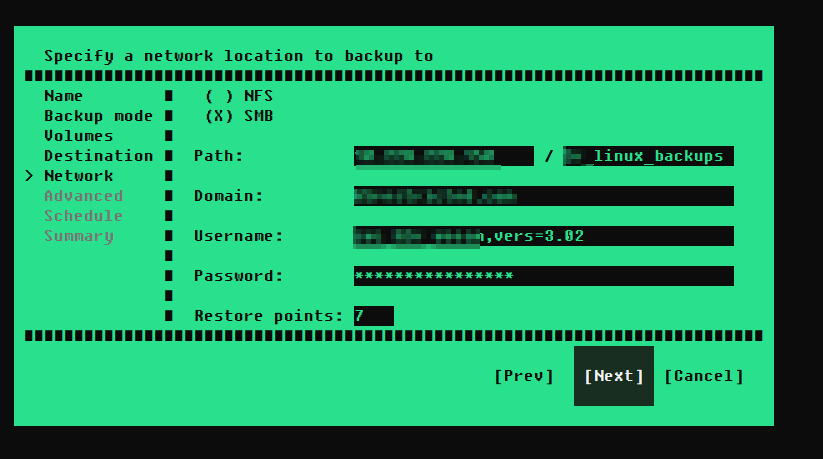 Not the answer you're looking for? Browse other questions tagged linux ubuntu mount cifs smb3 or ask your own question.

0
Linux Mounting Problem
2
CIFS Share Mount Error
2
rsync to cifs mount but preserve permissions
5
Use SMB2 protocol while mounting CIFS Share on a Unix client
6
How can I view disk quota usage on a CIFS share from a Linux client?
1
Windows 10 cannot connect to Linux Samba shares, except from SMB1/CIFS