How do I turn off the click sound when closing a tab in Chrome?

Every time I close a tab in Chrome, it makes a click sound. How do I turn off that sound?

I reported that issue back in Oct 2010. The problem doesn't appear on all clients and the reason is still unclear.

Common attempts at solving the issue include simply turning off the sound in Windows. But I would prefer to solve the problem at the source.

Why is Chrome even triggering that sound to be played? And why is it delayed? The problem would be far less annoying if the sound could easily be related to the action taken.

This didn't happen until recently. I don't know whether it's Chrome or the OS, but a clicking sound appears when a tab is closed nonetheless.

For completeness sake, it should be noted that (at least in mine and someone elses case), rebooting the computer fixes the issue.

I rarely reboot, so the problem doesn't fix itself for me.
Also, this is a temporary fix for the issue. Something triggers it to reappear some time in the future, I just can't figure out what it is.

I tried to see what API functions are invoked by Chrome when the issue appears. For that, I ran the 32bit API Monitor and added a capture filter for calls into winmm.dll.

I checked if Chrome even calls PlaySound (assuming that's how the sound is played) and it seems like it doesn't. I see a lot of other stuff happening when a tab is closed. But I wasn't able to pinpoint anything as the cause of the sound.

I'm now more confident that, while Chrome is the cause of the sound, it does not directly invoke it. I'm currently assuming that an action Chrome is taking is causing another process to emit the sound.

While investigating a few minutes ago, I started killing processes to see if and when the click sound would stop.

It stopped after closing all Windows Explorer windows. At this point it's unclear if there is any relation between Windows Explorer and the click sound being emitted. It'll have to wait for another day.

After the issue just happened again, I ran another Process Monitor recording and double-checked my Windows Explorer theory. Look what I got:

After closing the 2 open Explorer windows, the clicking was gone again.

In light of this new information, I decided to post another bug report. 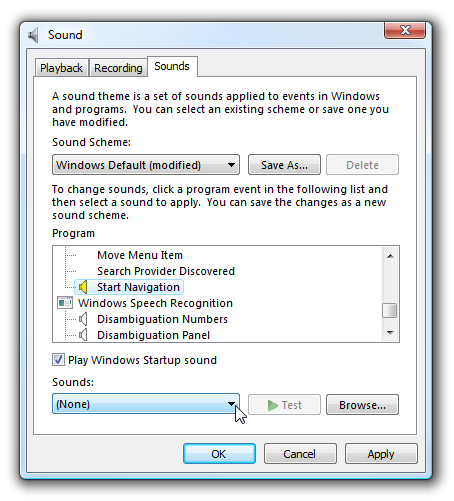 Kudos for HowToGeek for supplying this nice image

This annoying problem appeared spontaneously while I was browsing.

It is simply solved by closing all folders(windows explorer windows).

I can't say what triggered it, but I can say that I've had a few pdf files (stored on my computer) opened in Chrome. I've also had ONLY the current Donwloads target folder opened. These could all be possible triggers.

my lappy had it too and for mine it was just the 'sound on click' extension for my google chrome browser. You can just go to settings > extensions then disable it or straight away delete it. hope it helped!

patriciapatricia
1
1
Add a comment  |
Highly active question. Earn 10 reputation (not counting the association bonus) in order to answer this question. The reputation requirement helps protect this question from spam and non-answer activity.