I solved the problem, thanks to the answer below. It was indeed the VRM heating up over 80 °C and it throttled CPU. CPU was not heating up, but motherboard made it look like it was so that it could throttle it. The solution was to cool down VRM. It could be solved through a couple ways:

I had a old CPU fan, so I just installed it on the side of the case chassis, and it is blowing directly towards VRM. It is not exhaust but intake. Dropped my VRM temperatures by 10-20 °C. Downside to this is that now there is more noise coming while playing. It is not a big problem though because it is auto-adjusting its speed if there is no pin left out, if there is one, you still can do it via a program called SpeedFan. I plugged the CPU fan to System fan pins on the motherboard because there were no other pins. One is left out which is PWM pin. It doesn't auto adjust but I set it to 0% from SpeedFan while it is not necessary to use.

CPU dropping its frequency down to 1800 MHz.

What do I know about it?

Please watch the following 15 seconds video that I captured from CPUID HWMonitor, it might prove to be useful to understand what's happening.

Important: I know there is something called throttling, CPU or motherboard does it to protect itself from harm, but 50 °C seems to be a safe temperature. I know other people using the same program as I have see temperatures higher than 80 °C.

What are the possible causes for it to happen like this? How can I fix it? Also, any knowledge regarding the matter is appreciated, even if it does not solve the problem directly.

It looks like your motherboard's voltage regulator module (VRM) is overheating. The VRM is responsible for converting 12V power from the power supply into the low voltages used by the processor. Because it needs to convert large amounts of power, it can get very hot under load. On this motherboard, the VRM temperature is listed as TMPIN1 in HWMonitor.

While most quality motherboards have at least 6 VRM phases, this board has only a 3+1-phase VRM, which means it has relatively low power capacity. To make matters worse, there is no heatsink on the VRM as would typically be present on better motherboards. This means that the VRM on your board can overheat under sustained load. To prevent damage, the motherboard will report a fake CPU temperature to force it to throttle down, reducing the load on the VRM. The GIF in your post shows the VRM temperature hitting 90 °C before immediately dropping by several degrees when the processor is throttled with the fake temperature.

You may be able to address this problem by using a CPU cooler with a fan that blows towards the board instead of a tower cooler that blows air horizontally through a heatsink. Although these coolers tend to have lower performance, they provide airflow for the VRM, which can prevent it from overheating. Alternatively, adding case fans that blow towards or across the VRM can help.

The VRM on your motherboard is highlighted in green in this image: 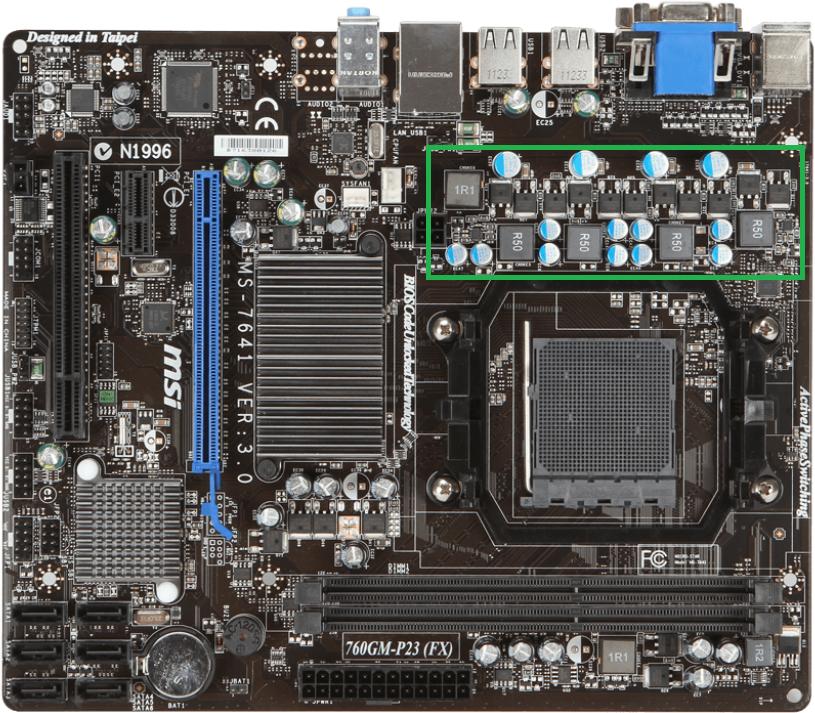 More information can be found in this MSI forum thread. You might want to read this Gamers Nexus article for technical information on the design and operation of VRMs.

VRM overheating is not limited to cheap motherboards. In fact, at the far high end, with the advent of consumer high-core-count processors like the Intel Core i9 series (Skylake-X, based on server-grade Skylake-SP silicon), some processors can draw so much power that even the most advanced VRMs can overheat when the processor is overclocked. In the linked article, the VRM tested has the equivalent of 12 phases, with 10 for CPU power (5+1 with phase doubling), yet it still overheats under extreme overclocks, highlighting the need to keep the VRM cool under heavy loads.

Not the answer you're looking for? Browse other questions tagged cpu motherboard temperature throttling cpu-throttling or ask your own question.

8
BIOS upgrade lowers CPU temperature
10
CPU temperature too high but fan not running at max speed
3
CPU is hot and CPU fan making very many RPMs and much noise. (CPU fan not listed in speedfan)
1
How to tell if CPU is actually overheating or is a false positive?
0
CPU voltage/temp spiking under low load on 8700k
5
SpeedFan suddenly stops being able to detect controllers and sensors mid game