How does the capacity (kVA) of a UPS affect my power consumption?

I asked my dealer for a 3 kVA UPS for my PC-class computer with a 12V * 8 * 42 Ah battery bank. However, he provided me with a 6 kVA UPS with the same battery bank.

He claimed no extra money for the increased capacity. Will the larger UPS add to my power consumption?

In your case, there are two important parameters for a UPS.

Power is a measure of how much instantaneous power the UPS can source. This is important based on how much power the attached devices need to draw.

Energy is important because it dictates how long the UPS can continue to run. This is largely dictated by the amount of the energy storage (batteries) in the device.

So, if the Battery Bank (energy capacity) is the same size, but the available power is higher than the devices you need to connect, then this device is equivalent for your needs.

There is a chance that the electronics that allow it to deliver more power, may make it less efficient in your use case, it is unlikely to be significant.

You probably got a good deal. It is possible that the bigger UPS will use marginally more or less power because its running at a different point in the efficiency curve - its impossible to say without knowing precise details of the unit, and its unlikely to be consequential.

That said, if you have a 6kva unit, it means that the components are rated for higher current, which means they will be more reliable. It also means you can have a higher maximum power draw from them (but this will, of-course, deplete the batteries faster)

This does, of-course, assume that the UPS's are "like-for-like", ie they are otherwise similar models.

To add to the other answers, just make sure you have the infrastructure to be able to power it. 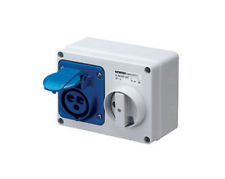 receptacle or a hardwire mains supply on a circuit with 30A capacity (for 208V-230V input).

Not at all (probably). But, you also do not have larger capacity.

kVA (kilo Volt-Ampere) is a measure of apparent power just like W (Watt). In fact, they are the same (W = VA) but when you read "W" this is a kind of theoretical figure which doesn't have too much in common with a real attached consumer whereas VA accounts for inductive losses and such, so it's much closer to a "real" device.

This has nothing to do with capacity (ampere hours) at all. Capacity is exactly the same.

Now, does it affect your power consumption? In theory, yes. While the battery is the same, the inverter is more powerful, so it operates somewhere in the lower range rather than somewhere in the upper range of its ability. Operating things (inverters, lightbulbs, motors, no matter what) in their upper range usually yields a greatly reduced lifetime, but best efficiency. Operating things (no matter what) in the low-mid range of their ability usually yields best lifetime but inferior efficiency.

In principle, this means that you are burning extra energy because your device is not operating in its best efficiency range.

In practice, as it happens, the load-efficiency curve on every no-shit inverter nowadays is ultra-steep. Anything at or above 20% you're pretty much at 90+%, and it doesn't get much better than that. Indeed, above approx. 80% the curve tends to go down again.

So, in practice, there's no real difference, but your UPS will probably last longer, just be happy.

To fully charge the bank costs same, but you can use higher load (of course, it will drain faster).

Not the answer you're looking for? Browse other questions tagged battery ups or ask your own question.

2
How can I select a good UPS for network hardware?
0
PC restarts on power outtage despite having a UPS
2
Does changing the screen resolution affect power consumption?
0
USB Power consumption in standby v. active
2
Adding another UPS battery in parallel, to increase runtime/VA capacity
0
Correct calculation of UPS VA based on nominal equipment power draw?
0
UPS any of the indicator lights not turning on
2
Why is my UPS not providing power to my Modem?