Is it possible to make the cell cursor blink in excel?

I have a large spreadsheet - with quite a bit of colour and bold font etc.

It's often hard to see the cursor - i.e. to find the cell that is selected. It just appears as a slightly thicker green line around the cell.

Can I make the cell cursor much more prominent e.g. blink? This feature seems to be present in almost every text application: the cursor is a blinking line or box. But not in spreadsheets! or at least, I don't know of any spreadsheet program that has this feature. Is there an obvious reason why not, or am I missing some other obvious way to make the selected cell easily visible?

am I missing some other obvious way to make the selected cell easily visible?

Well, when you’re not actively typing in a cell (or the formula bar), the “Name Box” (at the left edge of the screen, to the left of the formula bar and just below the ribbon) shows the coordinates of the current cell:

(If you have multiple cells and/or multiple regions selected, it displays the upper-left corner of the most recent region you selected.)

Also (as also illustrated above), the column header(s) and the row label(s) corresponding to the active cell(s) are highlighted.

Also, I find that tapping the direction arrow keys (←, ↑, ↓, and →) to move the active cell helps to make it stand out amidst the clutter.  Of course you shouldn’t do this if you have multiple cells and/or multiple regions selected, as it will wipe out that selection and leave you with a single cell selected.  (But Shift+direction arrow key will expand or shrink the selection, and not wipe it out.)

Here’s another approach.  It’s a bit heavy-handed, but that might be just what you need if your spreadsheet is so cluttered that you have trouble seeing the trees for the forest.  In the “Home” tab in the ribbon, “Cells” pane, click on “Insert” and select “Insert Sheet Rows” or “Insert Sheet Columns”. 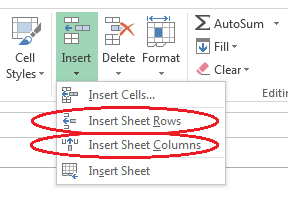 This may create an effect that’s visually more dramatic than the other suggestions.  Of course, these commands modify the spreadsheet, so you should immediately follow them with an “Undo”, or with the complementary “Delete” function.

“Insert Cells…” will also work, but not as well.

All of these active solutions (the direction arrow key ones and the “Insert” ones) will scroll the worksheet to bring the current cell into view, if necessary.

Let me suggest few other ways around:

You can press Ctrl+C to copy the active cell(s).  A blinking border will arise around the cell(s).  (This sometimes fails if there are multiple selections.)  You can press Esc to stop the blinking.

You can press Shift+Space Bar to select the row(s) corresponding to the most recent selection, or Ctrl+Space Bar to select the corresponding column(s).  Unfortunately, if you have a region selected, these result in the selection itself being lost.  For example, if you have the region F17:H42 selected and you press Shift+Space Bar, you will get rows 17:42 selected.  One of the original corner cells (F17, H17, F42 or H42) may be highlighted, but, in general, you have no way of knowing both column boundaries of the original selection (F and H).

Now, when you run the Flash routine, it will call toggle, which changes the fill (interior) color of all the cells in the selection to something radically different.  (If you can improve on this color-flipping algorithm, please tell us what you come up with.)  It then schedules toggle to be called again one second later; this will restore the original colors and produce a flashing effect.

If you want to flash more than once, just change the calling macro to something like

Modifying toggle to work on the entire current column and/or row is straightforward and is left as an exercise.

The code is a bit more complicated than it should need to be.  I tried to explain why in the comments, but I left out the rationale, which is, when an Excel cell has “fill” specified, even if it’s solid white, the border lines disappear.  You can see this for yourself by setting cell B2 to have a fill of solid white:

Before I added the special case, when I ran the Flash code on an uncolored cell (default format), the first call to toggle changed it to solid gray (127,127,127) and the second call changed it “back” to solid white — which, of course, was not what it was before, and which caused the border lines to vanish.

If you move the cursor before the flashing sequence is complete, toggle will change the color(s) of the original selection, and then of the new (modified) selection.  So these changes will not cancel each other out (as they should), and so you will have a bunch of cells with their colors changed.  So don’t do that.

I believe there is a way. I found this blog that teaches how to do it. Basically it says:

You can now apply the style to any other cells you desire in your workbook. Now create the macros (there are two of them), as follows:

To start the items flashing, simply run StartFlash. The cells formatted with the Flashing style will alternate between red and white text approximately once a second. When you want to turn the flashing off, simply run the StopFlash macro.

Not the answer you're looking for? Browse other questions tagged microsoft-excel spreadsheet or ask your own question.

8
Too much text for an Excel cell — how to make the cell scrollable
1
Enhance display of positional encoding for debug purposes, perhaps using Excel one-character-per-cell
17
Get rid of extra space in cell when using Text Wrap
2
Excel autonumber range
1
Applying options by default to an Excel spreadsheet
2
Excel: Based on value of cell in column A (three possible values), and cell in column B (integer), determine the value of cell C
1
When a Google Sheet is exported to Excel the line heights of wrapped text are not maintained - any way to change this?
0
Make the sum in a text type cell of Excel