A few years ago, I stumbled on this file on our fileserver. 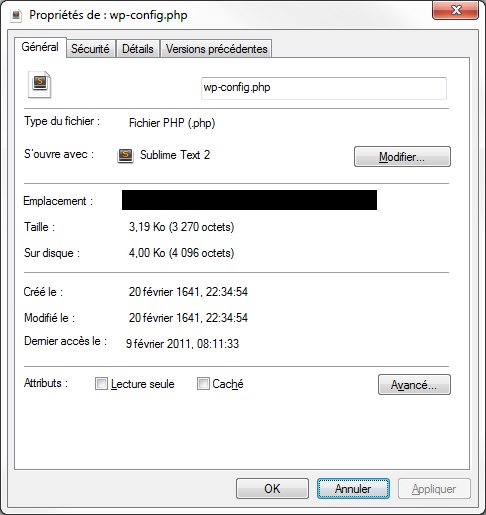 And I wonder how can a file say it's been created in 1641? As far as I know, time on pc is defined by the number of seconds since Jan 1st, 1970. If that index glitches out, you can get Dec 31, 1969 (the index probably says -1) but I'm stumped at this seemingly random date, that predates even the founding of the United States of America.

PS: Dates are in french. Février is February.

Windows does not store file modification timestamps like Unix systems do. According to the Windows Dev Center (emphasis mine):

A file time is a 64-bit value that represents the number of 100-nanosecond intervals that have elapsed since 12:00 A.M. January 1, 1601 Coordinated Universal Time (UTC). The system records file times when applications create, access, and write to files.

So, by setting a wrong value here, you can easily get dates from the 1600s.

Of course, another important question is: how was this value set? What is the actual date? I think you'll never be able to find out, as that could have simply been a calculation error in the file system driver. Another answer hypothesizes that the date is actually a Unix timestamp interpreted as a Windows timestamp, but they're actually calculated on different intervals (seconds vs. nanoseconds).

How does this relate to the Year 2038 problem?

The use of a 64-bit data type means that Windows (generally) is not affected by the Year 2038 Problem that traditional Unix systems have, since Unix initially used a 32-bit integer, which overflows sooner than the 64-bit integer that Windows has. (This is despite Unix operating on seconds and Windows operating on micro/nanoseconds.)

Windows is still affected when using 32-bit programs that were compiled with old versions of Visual Studio, of course.

Newer Unix operating systems have already expanded the data type to 64 bits, thus avoiding the issue. (In fact, since Unix timestamps operate in seconds, the new wraparound date will be 292 billion years from now.)

What is the maximum date that can be set?

For the curious ones – here's how to calculate that:

Some folks have actually tried to set this and came up with the same year.

If you don't feel too bad about some guessing, let me offer an explanation. And I don't mean "someone set the value to nonsense", that's obviously always possible :)

Unix time usually uses the number of seconds since 1970. Windows, on the other hand, uses 1601 as its starting year. So if we assume (and that's a big assumption!) that the problem is wrong conversion between the two times, we can imagine that the date that was supposed to be represented is actually sometime in 2011 (1970 + 41), which got incorrectly converted to 1640 (1601 + 41). EDIT: Actually, I made a mistake in the Windows starting year. It's possible that the actual creation time was in 2010, or that there was another error involved (off-by-one errors are pretty common in software :D).

Given that this year happens to be another of the tracking dates associated with the file in question, I think it's a pretty plausible explanation :)

The number of seconds between that epoch and the filetime displayed, is 1 266 705 294.
If we add that to the Unix epoch, we arrive at 2010-02-20 23:34:54 CEST, a Saturday. This is about a year before the last access date, which makes it somewhat plausible. So it may have been a Unix timestamp interpreted against the wrong epoch.

As usual for these types of questions, Raymond Chen's blog has an answer regarding this from the "Why is the Win32 epoch January 1, 1601?" entry from March 6, 2009:

The FILETIME structure records time in the form of 100-nanosecond intervals since January 1, 1601. Why was that date chosen?

The Gregorian calendar operates on a 400-year cycle, and 1601 is the first year of the cycle that was active at the time Windows NT was being designed. In other words, it was chosen to make the math come out nicely.

I actually have the email from Dave Cutler confirming this.

6
how to find which process had created any file in Linux
9
Difference between File system created by fdisk and file system created by mkfs - linux
2
A 0 byte file is created on desktop
4
What is file ']' ? How is it created?
1
Can a file be created from an inode?
175
How can a file size be zero?
1
How can a file created date be in the past?
0
Powershell File Creation - Date Created Weird