I'm trying to completely remove found.000 folder under Windows 8.1 on my C-drive.

I have tried a number of attempts (incl. under SafeMode), by changing its ownership (i.e. added my Username, and added Everyone with full control) unfortunately failed to remove completely (part of subfolders successfully gone), rmdir /s /q gives Assess is denied. It's stuck with one of sub-folder with attrib +S +H, oddly which is view-able only under cmd for some reasons.

Much appreciated for any ideas? Screenshot is as attached. 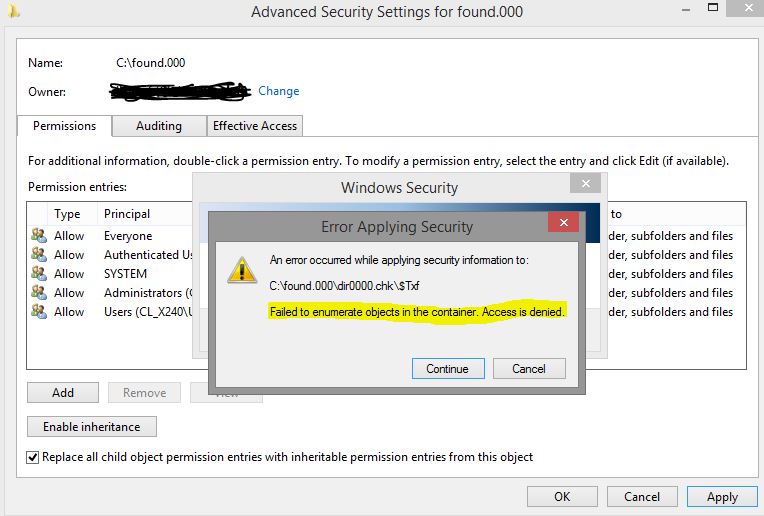 The folder named "found.000" is from chkdsk, it puts these folders and files inside the folder when it finds corrupted fragments on the partition, instead of deleting them it puts them here.

Windows lists .CHK files as “recovered file fragments”. A single .CHK file can actually contain one or more complete files, fragments of a single file, or fragments of many files. unfortunately you usually won’t be able to recover much data from .CHK files.

The reason you are even seeing it is because you have "show hidden files" enabled in windows explorer. They usually aren't visable to the user.

Try manually deleting them from the command prompt with administrator privileges. Or you could just leave them, if the are small sized it isn't going to mess with anything.

If you keep on seeing new files created here, it could be a sign your hdd is starting to fail. It wouldn't be a bad idea to check it's smart status.

I've done this in Windows 10: open Command Prompt as administrator, then run this:

to take ownership of the folder, and then:

to reset the folder security to match the parent. Once reset you can open the folder using windows explorer or delete it like normal folders.

I had a lot of found folders, found.000 to found.082, so to change them all at once, I ran dir found.* /a /b to get the list of found folders, then using text editor I changed each line to be like above, then copy paste the whole thing to command prompt.

I logged in as administrator and found that the OS would allow going into the "found.000" folder only by repeatedly clicking on it to open it. The OS presented a GUI message asking if I wanted permanent access.

On choosing that I did want permanent access, the "found.000" folder opened showing another folder named "dir.0000chk".

I deleted the "ContentFile.BLOB" file without objection from the OS.

With the "ContentFile.BLOB" file deleted, I was then able to delete the "dir.0000chk" folder and then the "found.000" folder. Thus another hierarchical permissions issue designed into the OS.

All three items, the file and both folders, are now in the recycle bin as seperate deletable entities.

I didn't see this solution. For window 10.

I was moving some old files from an old external hard drive and thought to do a defrag on it before putting other files onto it.

When tried to run defrag by iobit (asc)

I went into folder view and clicked -> "Show hidden items" <-

There were 4 folders that showed up.

No more error message running defrag on it (external hd)

I needed to run:

Then I ran the same command with 0 instead of 1 to re-enable it.

On linux systems just use the following command:

On windows systems open a shell and use the following command:

This will open a new shell as another user account with more privileges. Now just remove the directory with the following command:

Not the answer you're looking for? Browse other questions tagged windows filesystems file-permissions chkdsk file-corruption or ask your own question.

29
How to delete files and folders that cannot be deleted?
3
Can't Delete Old Windows Directory