Slow network speed in one direction only between two devices

I have an odd situation which I can't find a reason for this behavior.

I've created this graphic for ease of explanation, but to be clear, the Desktop is connected via WiFi to the switch, Server and NAS are over wired ethernet: 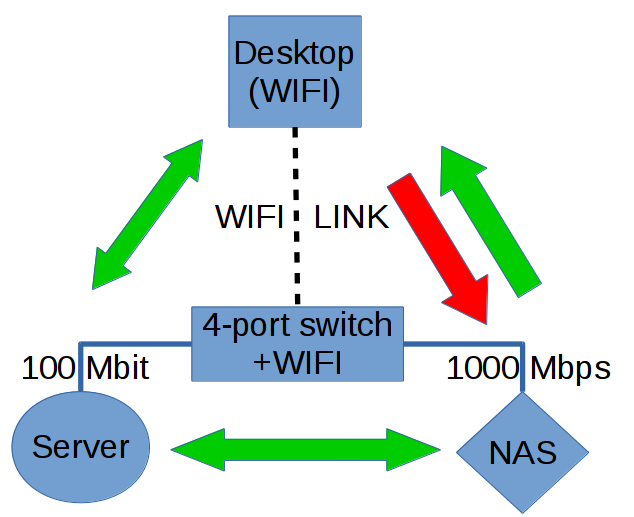 My NAS runs RAID5 storage over several protocols. I've tested this with simple FTP and get the same results as SMB/CIFS/NFS. All these results are via FTP.

The Desktop is connected to the switch via 5G WiFi running Ubuntu 16.04 (But I get the same behavior in Windows). In all situations in the graphic above with green arrows, I get between 10-12 MB/s speeds. Going from server to NAS, there are momentary drops to 0, which I assume is the NAS doing its work for the RAID5 writes.

What could cause this problem between only two devices and only in one direction? At the speed from Desktop to NAS, it's honestly much faster to upload to the Server first, and then transfer from the Server to the NAS, but it requires several extra steps to accomplish.

EDIT: Update On the NAS, I disabled jumbo frames, which should not cause an issue since the files I transfer are over 1 GB. But this improved the transfer from Desktop to NAS from 900 KB/s to 3 MB/s. But, this 3 MB/s is still only 1/3 to 1/4 the speed of all other possible transfers (green arrows).

0
Slow file sharing speed over LAN
6
Slow network file transfer (under 20KB/s) on newly built x64 Win7
1
How to transfer files between two computers in the same LAN?
1
Slow transfer speeds on Synology DS2413+ with Windows over wifi only
0
need to speed up file transfer between laptop and network hard drive
0
What can cause the network connection to degradate from 1 Gbps to 100 Mbps