Why do WiFi routers do such a bad job of channel selection?

Wi-Fi congestion, especially in the 2.4GHz range, is a serious problem in some areas. It is widespread enough that there are many guides to choosing a less congested channel. E.g. https://www.howtogeek.com/197268/how-to-find-the-best-wi-fi-channel-for-your-router-on-any-operating-system/

Given that most routers default to automatically choosing their channel and the hardware seems capable of detecting conflicting networks, why don't they do a better job of channel selection?

The failure of Wi-Fi APs to pick 2.4GHz channels well comes down to a small handful of issues:

The overarching problem here is that the 2.4GHz band is completely saturated in any moderately populated area. In addition, there are only 14 channels, depending on country, available to use. Out of those 14 only 3 channels don’t overlap and interfere with each other. And that is only true if the device uses only 20MHz of bandwidth and not the 40MHz bandwidth available on some access points.

When access points can see each other, on the same channel, they will cooperate and share the air space. If two access points are using nearby, but different channels, then they stomp on each other and each collision results in lost data.

Unfortunately, most modern Wi-Fi routers, for simplicity, default to auto-channel selection. However, they do not adhere to the 1, 6, or 11 rule. Instead they use a proprietary algorithm that is probably based on the usage of each channel. This causes severe and unavoidable interference of nearby networks, practically rendering the 2.4GHz band useless in some areas. In addition, the auto-channel selections usually only happen during a reboot or rarely at all. So the channel selection can quickly become stale as nearby access points also jump channels and compete to find the “cleanest” channel. To make things worse, the channel selection is based on what the AP hears, and not what the client hears, which may be closer to a different set of APs.

So, the problem is not the selection mechanism, but the fact that the 2.4GHz band is just completely saturated. Not only by Wi-Fi access points, but by cordless phones, microwaves, Bluetooth, baby-monitors, wireless cameras, and any number of other technologies.

The answer is to use the 5GHz band. There are dozens of 5GHz channels available. None of which overlap with others if the standard 20MHz bandwidth setting is used. This means that all devices using the 5GHz band can cooperate with each other without interfering. Unfortunately, Wireless-N and especially Wireless-AC allow for wider channels which overlap in an attempt to provide greater throughput. So, even in the 5GHz band, you should be conscious of co-channel interference and choose your settings wisely, rather than utilizing auto-channel selection.

In a densely populated area, the use of wide channels will provide little, if any benefit and could actually make things worse.

Just adding a visual representation about the 2.4GHz congestion vs the 5GHz band to the already excellent answers.

I live in an European capital with a strong Internet and Wifi market penetration.

Furthermore, most local ISPs also add an extra roaming SSID/network by default in their router/modems/CPE and so often it is at least 1 SSIDx2 per home/neighboor. Do keep in mind, that besides the APs broadcasting signals, clients also broadcast.

So as an example, only listening with a normal notebook without any amplification in a fixed point in my bedroom, without walking around home, I can see at least 136 SSIDs (around 70-90 APs). It would not be a long stretch that led me to suspect I might have around me aprox. 200 equipments (APs+clients) broadcasting signals in the 2.4GHz band.

Compare the graphics in the left side, 2.4Ghz, with the right side, in the 5GHz band.

As Spiff mentioned, channel selection is usually only done during boot time, as periodic re-evaluation of utilization of alternative channels requires additional or better hardware. There is also no accepted standard on how APs should cooperate when selecting their channel. What would happen if all the APs in an area suddenly see that channel 6 is being less utilized than channels 1 and 11? Right. A few seconds later channel 6 has become unusable, and every AP is jumping back to channels 1 and 11...leaving channel 6 open as the prime target for the next AP invasion.

In the 5GHz band, Dynamic Frequency Selection (DFS) may be required for some channels (channels 52-64 and 100-140 in Germany and the USA). This is, however, not meant to improve the cooperation of APs, but to prevent APs to affect weather radars. An AP using DFS has to constantly monitor the channel for weather radar and, if it detects something which could be a weather radar, has to leave that channel immediately (typically switching to a channels from 36 to 48, as these are not used for weather radar and do not require DFS...in other words, the AP does not select the best alternative channel, but rather just a channel which is guaranteed to be safe from weather radar).

It may be possible that some manufacturers of APs have algorithms which can optimize the channel assignment when an area is covered by a number of their (and only their) APs. A "Rogue Access Point" (which is not taking part in this optimization process) can significantly disturb the network. Some companies periodically perform hunts for Rogue APs on their premises.

In a high-congestion area where there are dozens of APs on 2.4GHz channels 1, 6 and 11, I sometimes get a more reliable connection by forcing 802.11b (the slowest mode), especially on less-used channels like 4 and 8. The bandwidth overlap diagram from wikipedia (below) suggests tantalizing clues why this might work, since the round bandwidth profile of 802.11b (DSSS) makes it look like it would care the most about the middle of its own channel even if overlapping channels were present. Of course this approach is too zany for the router to do on its own. Your mileage may vary. 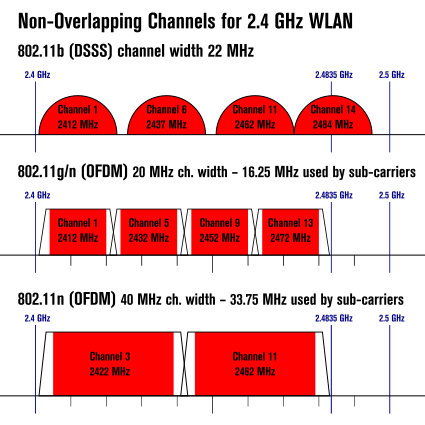 The real reason is that 2.4gHZ is a junk band and it never should have been used for anything. And the reason is it is a junk band is that it is the same frequency as the water molecule, it resonates. That is why radio astronomers use the band extensively searching for exoplanets and nebula. Corporate didn’t want the band because they knew it was useless. So thanks to the corporate toadyness of the FCC, 2.4ghZ became public domain by default. Sort of like the town dump being inagurated as a city park, but without the improvements.

The problem of the water molecule can’t be understated. Anything wet will interfere, including humans, dogs, house plants, microwave ovens, aquariums, snow and plastic water pipes. Competing transmitters cause “interference bubbles” that wander around over the course of minutes. There is no solution to this wandering, its part of the resonance of 2.4 with the water molecule. The more competing transmitters in your neighborhood the worse the wandering gets.

Sorry to say it but the only solution is really to move up the spectrum to 5.6.

Not the answer you're looking for? Browse other questions tagged wireless-router wifi-configuration or ask your own question.

1
Which WiFi channel and Channel Width can support more distance?
2
How to set Guest wifi to have different wifi channel?
0
Will more wifi routers make the wifi "better"
2
Combine 3 WiFi routers into one network
0
2.4GHz WiFi channel selection when all the non-overlapping channels are crowded
19
Choose WiFi channels with many weak or few strong competitors?
4
Should WiFi routers be set to a channel or choose automatically?
0
Which wifi channel should I pick?
0
Two separate wifi networks using two routers and one Internet