Use Excel conditional formatting based on cell display, not content of cell formula

In my Excel worksheet, I have a cell containing the following formula:

The issue I have is that there are a lot of #N/A display values that look messy, so I want to use conditional formatting to make the cases when #N/A is displayed have white text. So far every attempt makes every value have white text regardless of if the display value is #N/A or a number. Does anyone know a way to do this?

Things I have tried:

Here’s an image of what I’ve tried: 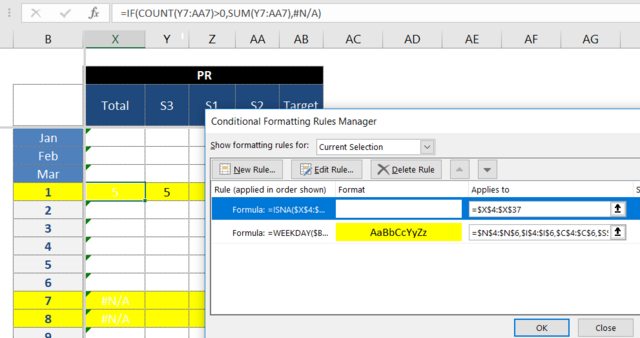 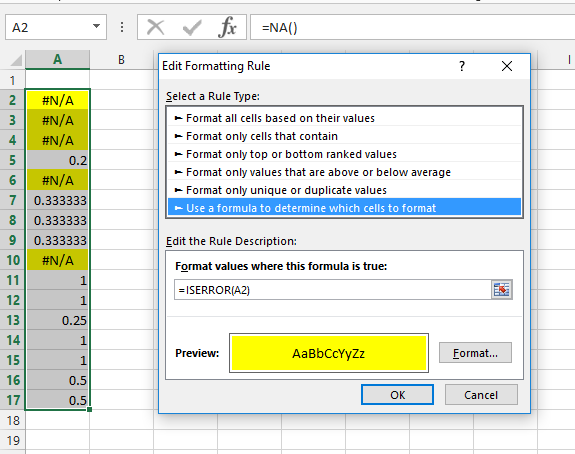 The problem is the absolute references in your ISNA() function.

ISNA() will never look at the other cells in the range even if you let them be relative references.

BUT it works if you at least let the row reference be relative. That is because the range examined by ISNA() keeps changing so the first cell is the cell you actually want looked at. That happens on each new row so while it looks the same, pretty much, you are actually changing the first cell in the range, without seeing it happen visibly, and so ISNA() is looking to a new first cell each time.

If you make the change and look at the CF rule with the cell highlight in different rows each time, you will see the shown rule changing that range.

(You are using the function's failure to work as one might think it would to actually be the accomplishing operator achieving your goal. It's sort of like wanting a pile of trash removed, convincing people that the stuff in the pile is valuable, looking away while they steal some, and eventually having no trash left in that. You are using failure to achieve a worthwhile goal.)