The default dpi setting on my windows 7 laptop is set to 125%. I know there was a time (and you still can see a lot of screenshots where this is proven) when 100% was the default windows (7) setting: 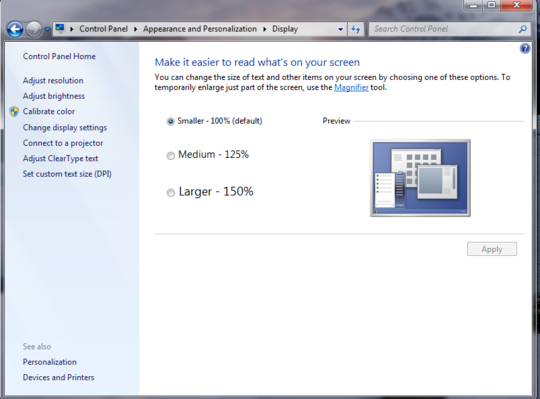 When and why did that change? Are there any factors where this setting depend to (type of pc, e. g. laptop vs. desktop, display adapter, etc.).

What is the default setting on Windows 8 and Windows 10?

I think it is fairly simple: as long as screen resolutions increase, the default DPI(100%) will need to increase as well, to prevent "too small" UI.

Windows 7 released in 2009 and at that time, full HD monitors were not a thing, I guess.

Have a look at this post on MSDN Blogs but I'll quote the important part:

A change was made for Windows 7, to set the screen resolution to the monitor's native resolution and if the screen is over a certain resolution to default the font size 120 DPI (dots per inch). This is approximately 125% of normal 96 DPI (100%). When the system defaults to 125% DPI it also adjusts the MS Sans Serif font to be bigger. If the user then decides to set the DPI back to 100%, then TrueType fonts, which are scalable, adjust as expected.

The author of the MSDN article also followed this:

The issue is not an internal problem, it can occur on any Windows 7 system that has a high resolution monitor for which drivers can be found during the initial install and so default with 125% DPI.

Windows 8 and 10 followed the same perspective.

Not the answer you're looking for? Browse other questions tagged windows-7 windows windows-8 resolution or ask your own question.