Powershell: use a group of dynamically added commands in new window

I am struggling with something that should be obviously simple but seems not so straightforward to solve. I have a dynamic sequence of powershell commands to run. It is a part of some templating I wrote for myself to make myself easier in my workflow.

Here is a simple example of a generated grouped commands:

It is possible to run this $commands by using Invoke-Command. So eventually I have this function that handles it:

This works fine. It executes the commands in the object in the window. But with the time, I have added more functionality to it. For each new instruction, I have to open powershell each time for that... That is because sometimes, when a script is running I cannot issue another function. So, my goal now is to run the above command group in a new window so that I can use one same shell window to invoke multiple tasks (that runs in their own windows). I thought that it would be simple, so I altered the function to

That leads to this result:

The navigation did work. However, my output information is lost. Some commands have added instructions like deploy S1 foo or deploy FS -src "data". Those are hard to memorize sometimes. For that, I have two small questions: (1) Where is my Write-Output data? And (2) what is that weird CLIXML thing (seems "special" powershell XML according to google)? When I issue exit to close that window, I see a bunch of XML stuff before the window closes.

Is it possible to open a new powershell window, then execute the commands in my $commands object correctly (thus including the Write-Output data)?

but the new window spits a lot XML stuff... 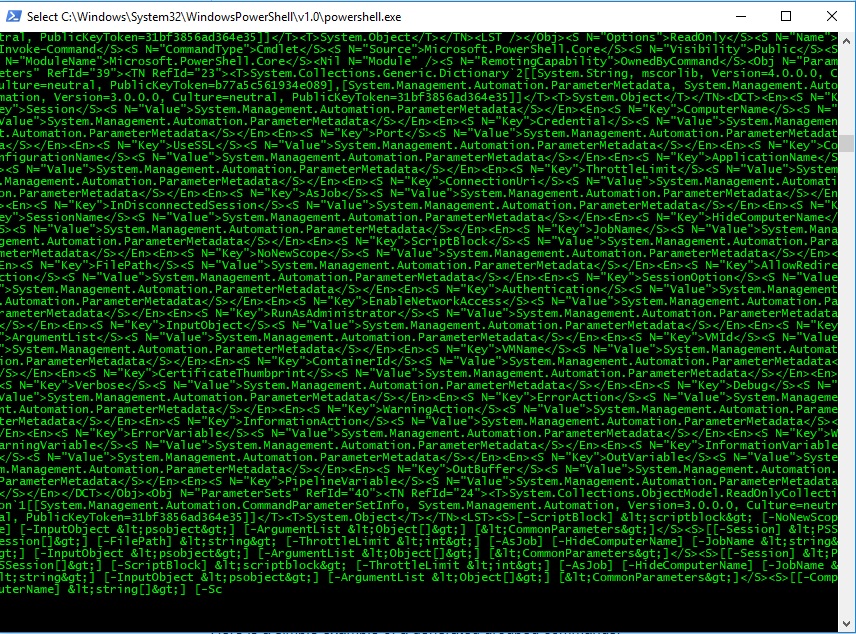 Browse other questions tagged command-line powershell or ask your own question.

9
Remote powershell permissions restricted to machine
1
Can't Use Powershell Active Directory Cmdlets Even With RSAT Installed
2
PowerShell -replace old,new -- multiple replacements possible?
0
Unable to login after running a powershell/batch script to add new user
0
How to preserve output format of Powershell commands that are executed from an object?
0
PowerShell Script: Can you create a dynamically updating variable ($var.substring([int32],[int32]))?