So here's a question that I haven't been able to find the answer to anywhere:

What field(s) does Windows 10 use to index files by whenever performing a start menu search? The obvious answer would be that it's indexing by filename and filename alone, but I'm not entirely so sure. If it's not clear what I mean, observe the following example below:

As of right now, the ONLY folder that I have Windows 10 indexing on my computer is the "C:\ProgramData\Microsoft\Windows\Start Menu\Programs" folder (and all of its contents). This is because I put shortcuts to all of my programs in there. But look at this: 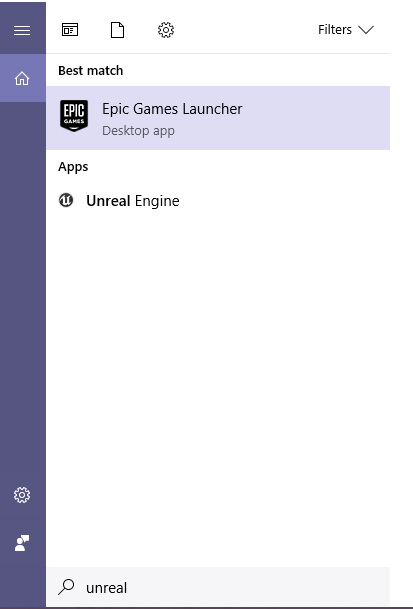 I noticed that the "description" of the "Epic Games Launcher.lnk" that can be viewed when opening up the properties says "UnrealEngineLauncher," but whenever I type "UnrealE" into the search, nothing shows up at all, so I don't assume that Windows is using this "description" field to index the shortcuts. So I have no idea what it's really doing.

Does anybody understand this, and, apart from deleting the Epic Games Launcher shortcut, does anybody know how to make Windows 10 index by filename only? Thanks.

You have two parts to your question. First, "does anybody understand this." According to Microsoft:

"By default, all the properties of your files are indexed, including file names and full file paths. For files with text, their contents are indexed to allow you to search for words within the files."

Of course, this is not as specific as we might like, but it is easy to see how Unreal Engine could be associated with the Epic Games Launcher, since the indexing is this broad.
This means that the hypothesis "that Windows is using this 'description' field to index the shortcuts" is in fact correct.
Fortunately Windows does allow some control over this behavior, even if it is not as much as one might like.

That brings us to the second part of the question: "Does anybody know how to make Windows 10 index by filename only?"

The short answer to this part of the question is "no."
Windows does allow some modification of indexing behavior, but not in great detail. On Windows 10 (and some earlier version) in your Indexing Options, in Advanced, you can change indexing behavior on a per-file-extension basis. Unfortunately, it does not allow fine-grained choices such as "only by filename." Your two choices are "index properties only" and "index properties and file contents." In your case even the more restricted "index properties only" option will include the description, because that is part of the file's properties.

There is an additional piece of information relevant to this whole discussion: why does "Epic Games Launcher" not only show up, but show up as the best as the Best Match? Briefly put, "Best Match" is a potentially misleading label. This is a result field that attempts to find what the user is most likely interested in, not some simple ranking of how closely a result matches the search term.

Not the answer you're looking for? Browse other questions tagged windows windows-10 search shortcuts start-menu or ask your own question.