Microsoft forces MS Office files to be treated differently in OneDrive than other file types. I see no benefit to MS Office sync services when saving files to OneDrive (it will be backed up anyway) and it nearly cripples the use of Office, slowing down syncing and complaining when there is no internet (I often work without internet access). I have Office 2016 Pro (Not 365) and I do not login office or wish to use any of the Office Cloud features. I do use OneDrive to sync files across devices so I don't want to remove OneDrive I just want Office and OneDrive to function as two separate applications. Unfortunately Office will not allow you to save an office document to OneDrive and it will throw the Upload Blocked error and wants you to sign in. The only way to save a file to OneDrive is to save it to the desktop first then copy and paste it over to OneDrive which is counter productive. I have unchecked the Office integration checkbox in OneDrive but it doesn't seem like this does anything. The OneDrive folder is located at C:\user...\OneDrive\ so it's not like it's a remote link. 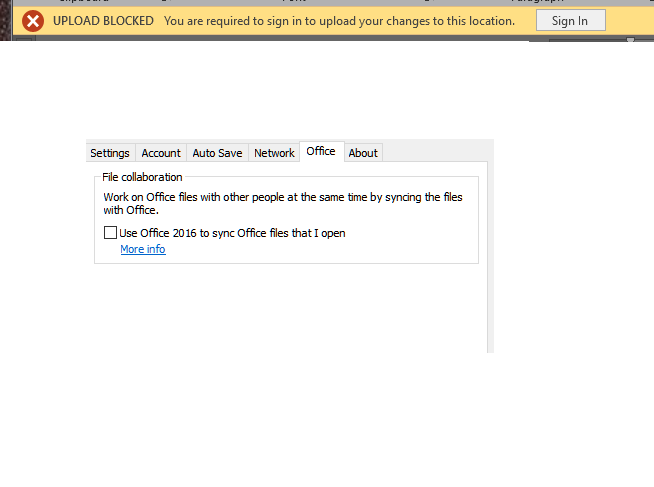 My question is how do I disable or bypass the Office/OneDrive sync features or simply allow Offices documents to be saved to OneDrive like any other location on my hard drive?

I've been fighting this for a while and got it to work temporarily by rolling back the OneDrive version however the issue has cropped back up. I posted a question on the MS Community Forum a few months back but it was not resolved. I know it's a bad idea to copy paste the same info across two forums so I will instead provide a link: https://answers.microsoft.com/en-us/msoffice/forum/msoffice_drive-mso_win10-mso_2016/how-to-disable-office-2016-uploads-to-onedrive/317a9952-24d2-48fb-b83f-46e64662bbf1

I've found a solution for this. There is an office Tab in One Drive Settings (at least on current version fo windows 10).

Uncheck the box that says: "Use Office application to sync Office files that I open".

This seems to stop office from being connected to the oneDrive account, treating files saved to onedrive as ordinary files.

Hope you're no longer bugged by this issue. I was facing the same thing as of late, while it was fine before. That indicates to me that it has to do with which version of OneDrive you first connected each share.

In my case, OneDrive had been running for quite some time and had been updated by Office updates. After I added a second location to OneDrive, I noticed a difference in the folder icons of both shares, one had the blue clouds as icon and a root-folder named "Sharepoint", the other had a blue office building as icon and a root-folder named . And the dreaded "upload blocked" errors that could not be fixed by re-authentication.

That led me to believe that I needed to reconnect the share (the one with the blue clouds icon, which was the older existing connection) from scratch. So I stopped synchronization for that share, shutdown OneDrive just to be sure, then hard-removed the folder named "Sharepoint" and finally went to the Sharepoint location in my webbrowser and clicked Synchronize.

At this point, both shares have the same folder icon and have the same root-folder, but more importantly, the problem of "upload blocked" is gone!

Always nice when different versions of the same are not 100% compatible ... Also slightly disappointing that the official MS-threads on this topic are all closed without a mention of a solution, so I couldn't post my feedback there.

how do I disable or bypass the Office/OneDrive sync features or simply allow Offices documents to be saved to OneDrive like any other location on my hard drive?

If you don't want to sign in Office for OneDrive saving, it requires OneDrive desktop app for file syncing. Try the following settings:

Not the answer you're looking for? Browse other questions tagged microsoft-office sync or ask your own question.

2
MS Office files aren't synced to OneDrive if I'm not signed in to Microsoft account in MS Office
5
Disable the auto-upload that occurs on each save
0
OneDrive and Office 2013 integration — what is this and how to disable it?
0
How to sync Sharepoint Online (Office 365) with MS Office 2016 Pro OneDrive for Business?
2
Collaborative editing of Office documents: what options are there?
2
MS-Office 2019 how to stop syncing to onedrive
0
Removing -copy files OneDrive created
0
Office 365 A1 Plus for faculty, what will happen to files in local OneDrive folder when license ends