Battery ran out of charge suddenly and won't charge

I've dell inspiron 5547 laptop and it was working fine till last night i used it. I didn't shut it down as I usually do and just closed the lid to let it go to hibernate or sleep mode, battery was fully charged then. Now, at work I pressed the power button but it did nothing, i then plugged in the charger and charging indicator turned on then switched off again, I pressed the power button again while AC adapter was plugged in, laptop booted but charging indicator started to blink in red, and it's currently doing the same as i'm typing. I checked my battery status using battery info viewer and results are as follow. 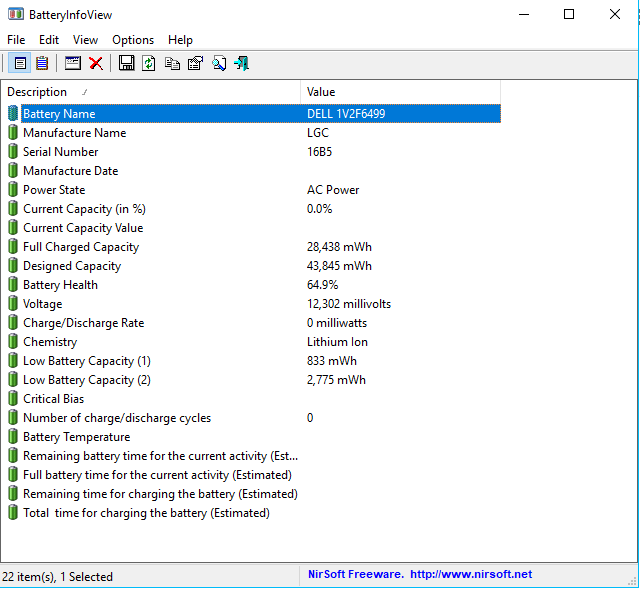 as it can be seen that battery is pretty healthy (65%) but it's not charging.... further in bios it says "this battery has experience permanent failure and needs to be replaced" i'm unable to understand this. any help would be much appreciated

The battery capacity is severely degraded and chances are one of the cells has now died. The battery is not charging at all and its "current capacity" is at "0.0%"

A healthy or new battery should be at or near it's "design capacity". One that is at about 60% capacity has either had a hard life, is very old or both. Batteries loose capacity over time and need to be replaced. As they age their chances of critical or catastrophic failure do increase as there are important chemical changes going on both during the charge/discharge cycles as well as over the life of the battery. Whiskers of metal can form in the battery puncturing layers separating internal parts, or films can form on contacts blocking the flow of electrons.

If an actual cell in the battery has failed and discharged itself then it it potentially hazardous and needs to be disposed of per your manufacturer guidelines.

Your BIOS message is also telling you exactly the same: that it is old, has failed, and needs replacement.

There is a very small chance that it could be a fault in your charger circuitry in your laptop, but battery failure due to age is far more likely.

Not the answer you're looking for? Browse other questions tagged laptop power-supply battery power dell-inspiron or ask your own question.

2
HP 4530s laptop works with power cord but won't charge battery
1
Should I re-charge battery when it has 90% of juice remaining?
0
Laptop won't boot and charger won't work
0
Battery charging on and off, should I replace battery or AC adapter power supply?