I'm using Windows 10 Professional. When I initially installed it, I chose German, and I want to change the display language to English instead. That includes right-click menus, Explorer, etc.

Under Region and Language, I have removed everything but English (US) and made sure it's set as the default: 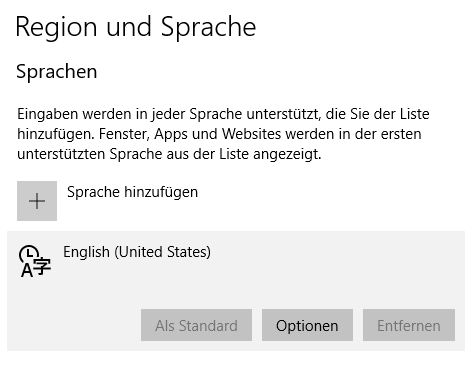 Under Control Panel > Language, it also only says English (US):

In that same menu, under options, it says that no language pack is available:

I have also tried all of the above with English (UK) instead of English (US), didn't work either. I've rebooted between changes to no avail.

All right, found a solution.

I downloaded the language pack from https://support.microsoft.com/en-us/help/14236/language-packs and installed it with lpksetup.exe which comes with windows. Now my system is fully translated.

To me it didnt work.

But here's how i successfully made it:

Not the answer you're looking for? Browse other questions tagged windows-10 language or ask your own question.