How to disable Ctrl+Q shortcut in Firefox on Linux

Is there a way to disable or catch shortcut only for one application? I'm using Ubuntu with Unity.

(this setting will take effect with a restart of the browser.)

In Firefox Quantum, the about:config settings that used to warn against Firefox closures via an accidental Ctrl-Q keypress no longer work. 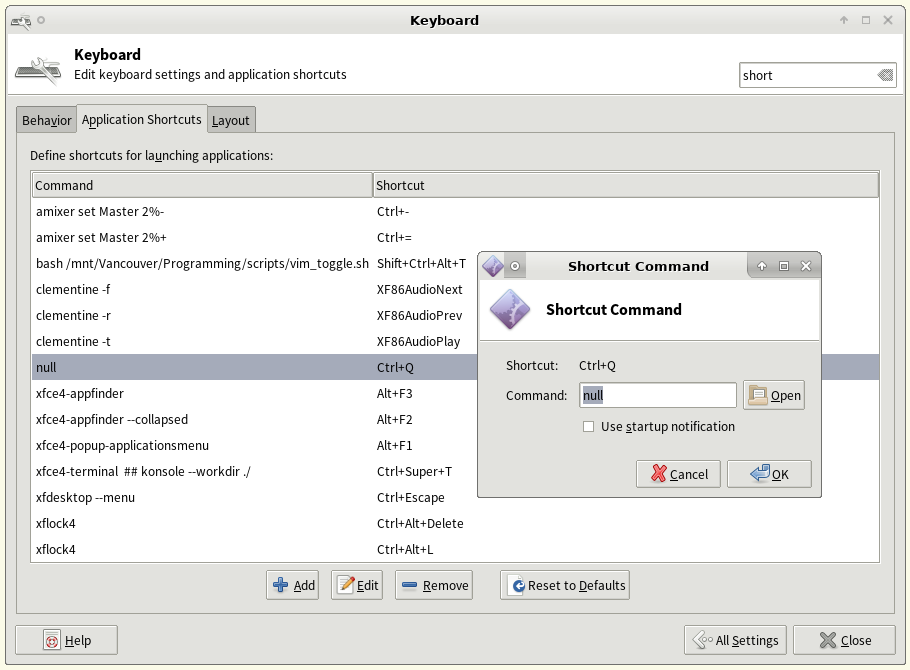 Invocation: here, I pressed Ctrl-Q in Firefox Quantum v. 60.0.1 (64-bit); instead of quitting Firefox, I get this popup, 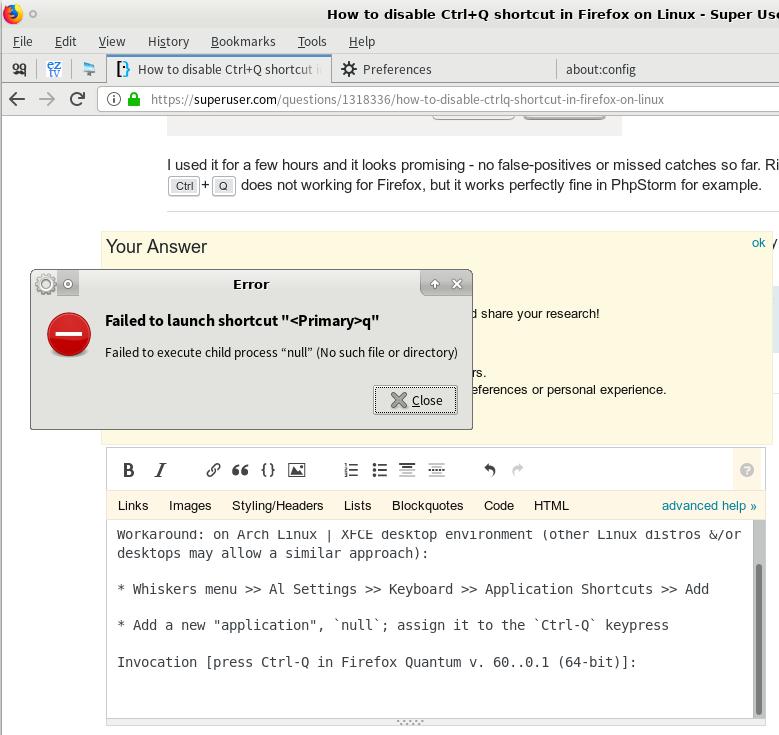 Caveat: this, of course, globally affects all Ctrl-Q keypresses. However, -- per my own preference -- that shortcoming is outweighed by nullifying those accidental Firefox Ctrl-Q closures (after which I must re-login into websites: GitHub; reddit; ...).

@crazypyro 's answer also works for me (FF Quantum 63.0 on x86_64 Linux) giving a popup warning if you try to Quit Firefox. That should be probably regarded as the specific answer, with my solution as a more general workaround.

about:config (both of the following set to true):

For some time in Vim I've encountered the occasional and frustrating issue where the terminal "freezes" and I lose keystroke control of Vim (requiring me to kill/restart Vim).

After some investigating, it turns out the issue is Software Flow Control (XON/XOFF flow control). Ctrl-s freezes the terminal until Ctrl-q is pressed -- which, per my solution presented above, is globally remapped to "dummy application" true.

The workaround to this issue is to add the lines

near the top of your ~/.bashrc, then open a new terminal and start Vim.

This can be accomplished without an external application by a tiny bit of javascript in your Firefox profile.

As a prerequisite, you must enable userChrome.js (see below, or obtain from the original GitHub repo)

After copying the chrome directory and its contents into your user profile, create a file <profile-dir>/chrome/disable_ctrl_q.uc.js with the following content:

Lastly, restart Firefox, and ctrl+q will no longer cause the application to exit.

For completeness, below are the full contents of the modified chrome files. To enable userChrome javascript, create these two files inside a chrome directory within your Firefox profile.

An ugly, but simple and effective workaround is always keeping a page open that has an active onbeforeunload handler, i.e. will trigger the "This page is asking you to confirm that you want to leave - data you have entered may not be saved." dialog when you attempt to close it.

That way, if you accidentally try to CTRL+Q, you will receive that dialog, and can choose "stay on this page" to cancel the exit.

Edit: Custom page I made just for this purpose

Since the bug is still untouched, I have no idea if this is actually fixed or if it just happened to start working due to some list randomly being in the right order or something. If you're still experiencing this issue after the date of this edit, would you mind leaving a comment confirming that the settings are set the same way, the Firefox version you're using, and the OS?

I was able get what I need with AutoKey. After installation I created empty script with assigned Ctrl+Q as "Hotkey" and .*Firefox as "Window filter". 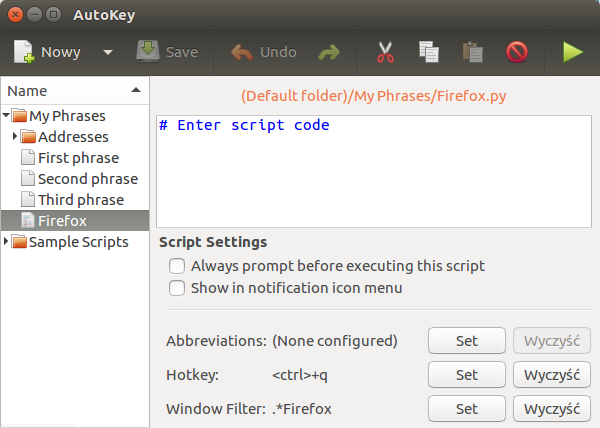 Then in AutoKey preferences I added it to autostart and disabled notification icon, so it becomes transparent for me. 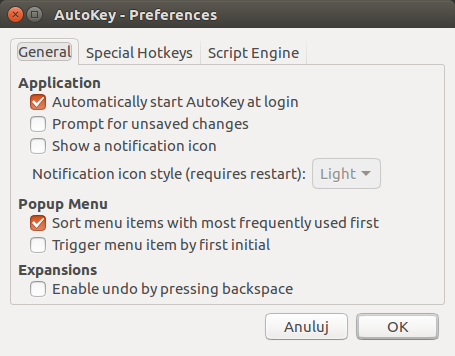 I used it for a few hours and it looks promising - no false-positives or missed catches so far. Right now Ctrl+Q does not working for Firefox, but it works perfectly fine in PhpStorm for example.

In addition bug 1215061 gives some hope that this will be easier in future and Firefox will finally get some decent keyboard shortcuts settings.

I have been plagued by this on and off through varoius firefox versions, too.

Here is one solution that always works, and works for other browsers too:

Keep a tab open with this page (you can save it locally): https://janschejbal.github.io/disable-ctrl-q/

You have to click the button on that page once so firefox thinks something important is going on there, but then you can completely forget about it.

Read the page for an explanation.

It has saved me a good handful of times (:

12
Is there a keyboard shortcut in Firefox to paste the Unix "primary selection" clipboard, not the Firefox one?
3
Linux - remap Ctrl-[ key
1
Allow opening a new tab with Ctrl+T on all websites in Firefox
8
Firefox Clearing Cache - Ctrl + F5 doesn't work randomly
9
Is there a Windows keyboard shortcut to quit Firefox?
4
Firefox shortcut not working
10
How to map CTRL+A, CTRL+E to function as Home, End system-wide?
3
Toggle images in Firefox on a per-tab basis?
8
Windows 10 shortcut disable - Win + Ctrl + S
0
Handling conflicting addon keyboard shortcuts in Firefox