How to force Chrome to use integrated GPU for decoding?

I want Chrome to utilize iGPU (GT630 on i7-8700k) for video decoding, especially VP9 decoding on YouTube. My discrete GPU is GTX970 and it is not capable of decoding VP9. Currently, VP9 is software decoded on my system, putting load on CPU and occasionally skipping frames.

Both GPUs are detected by the system (Windows 10): GT630 as GPU0 and GTX970 as GPU1. I use 2 screens. I don't care where they need to be connected (970 or Motherboard) as long as Chrome uses iGPU and I can keep using Nvidia for gaming. One of the screens is 144Hz. The motherboard is ASUS ROG Hero.

I've tried different settings, but nothing seems to work as intended, and usually people look for a solution to the exactly opposite problem...

However it still uses Nvidia for renderer and doesn't utilize GT630 igfx.

The only method that works so far is disabling Nvidia card in Device Manager, launching Chrome, and re-enabling Nvidia card. When Chrome is launched without the discrete card present in the system, it runs with the following configuration and it's the only one that uses HW decoding from GT630:

google-chrome gpu integrated-graphics hardware-acceleration vp9
Share
Improve this question
edited May 10 '18 at 8:34
Gepard
asked May 2 '18 at 22:34

I had this problem for a few months now and yesterday I found a solution to the problem:

Display settings -> Graphic settings -> Choose an app to set preference: Classic App -> Browse -> Firefox.exe (Chrome in your case) -> Firefox (Button that appears below the browse button) -> Options. I then chose Power Saving which makes my browser use the iGPU. High Performance would make the browser use my dedicated GPU. 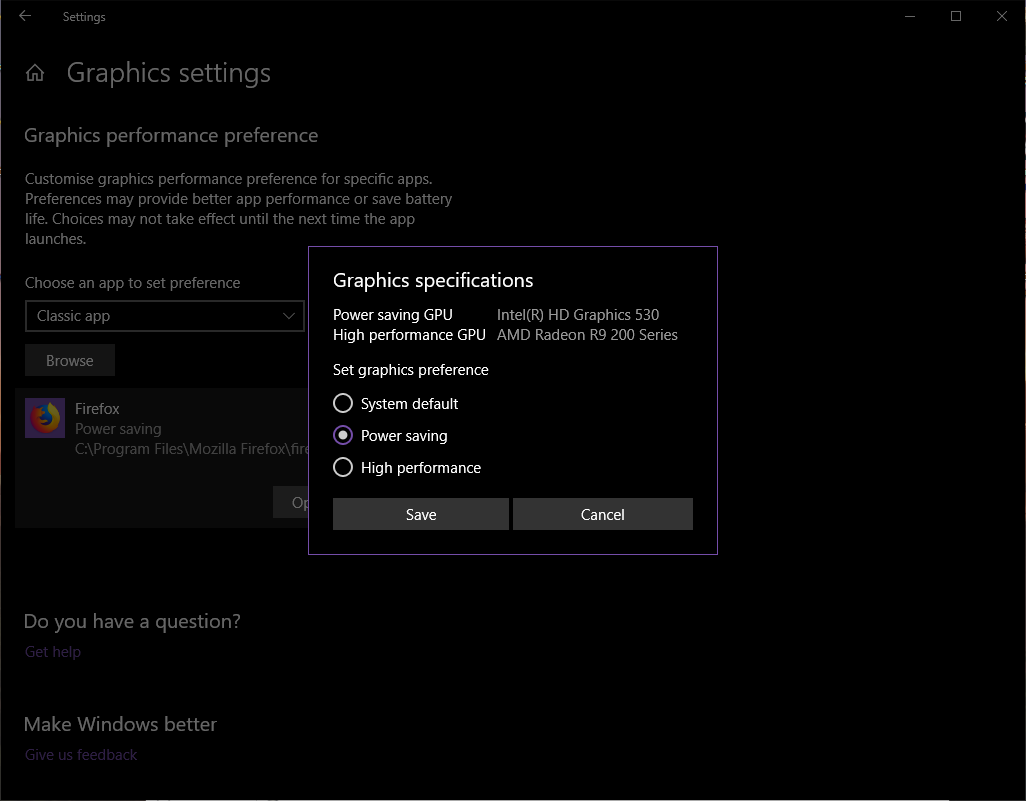 If you wish to automate the task of disabling the Nvidia adapter, launching Chrome and re-enabling the adapter, you may use a batch script (.bat file) that you can put on the desktop as an icon.

Check in Device Manager, section Display adapters, that the above name of the adapter is correct.

Other utilities that can be used instead of Devcon are DevManView and MultiMonitorTool.

Spent a few hours tracking down a working solution to this with Windows 10 October 2018 Update. As of right now, using the directions provided by Unrul3r, I have been able to successfully enable hardware VP9 decoding in Chrome powered by the iGPU.

(Link to screenshot) Setup is as follows:

(Link to screenshot) This is what you want to see in chrome://gpu to verify everything is working:

Now, here's a quick walkthrough on how to get this working correctly.

(Link to screenshot) What you should see in the Graphics settings window when finished:

And there we go! Testing with this 8K YouTube video of the Unigine Superposition benchmark now shows ~2-3% CPU usage and <1% dropped frames (totally smooth to the eye, no stuttering). In comparison without the hardware decoder, CPU usage would be capped out, and the result was an unwatchable mess with >50% of frames dropped.

The simple solution is the one gave by Unrul3r, you just need to go to Graphic Settings in Windows 10 Control Panel and add Google Chrome or Firefox in Classic app mode, and press option button, select High performarce and that's it. Run some WebGL Benchmark and you will see the web browser using GPU-1 or the number of your discrete GPU. It works for any other application like Word, Excel, etc.

Another option to improve the performance in Google Chrome and specially the video playback (i.e Youtube), is to use the flags configuration page, to set the GPU Rendering to Enable, see the picture:

As you can see in the next image, my Discrete GPU es the GPU-1 AMD Radeon R7

There is no desktop counterpart to Nvidia Optimus (sans discontinued Lucid Virtu) which allows dynamic GPU switching. In order to use Intel IGP for hardware acceleration in Chrome, you must connect a monitor to Intel port and set it as main display in settings (while allowing additional displays with Nvidia).

However, if your goal is to simultaneously game on one screen with Nvidia and play youtube on another screen with Intel, you are out of luck, as games also run from the main display (now rendered by Intel).

If you only do one at a time with a single monitor, try connecting it to both Intel and Nvidia, and toggle main display and panel input source as a workaround.

Not the answer you're looking for? Browse other questions tagged google-chrome gpu integrated-graphics hardware-acceleration vp9 or ask your own question.

0
How to force Chrome to use discrete GPU for specific range of URLs?
1
HEVC/H.265 GPU HW decoding and output to different card