How do I disable Windows 10 login prompt to set up a PIN?

So I recently wiped my hard drive and did a clean install of Windows 10 using the Windows 10 media creation tool (which includes the May 2018 update). Since then, every time I log on using my MS account, I also get a blue screen telling me to "Use Windows Hello instead of your password". No option to cancel, just a 'Next' button: 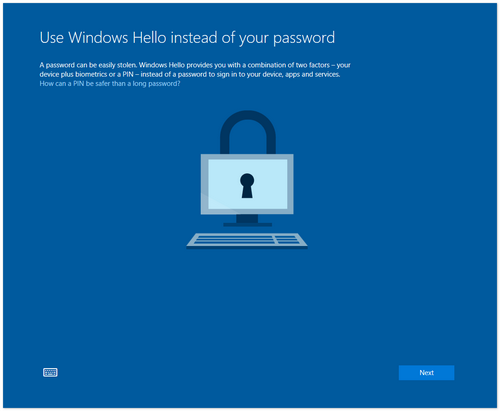 This takes you to a screen where you can cancel and then back to a "Did you mean to cancel PIN?" screen with a 'I'll set up a PIN later' link: 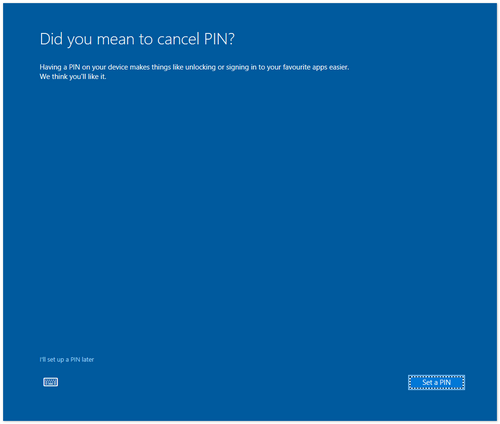 Anyone know how to disable this very annoying behaviour?

I set up the PIN to be the same as my password (after ticking the 'Use letters and symbols' box): 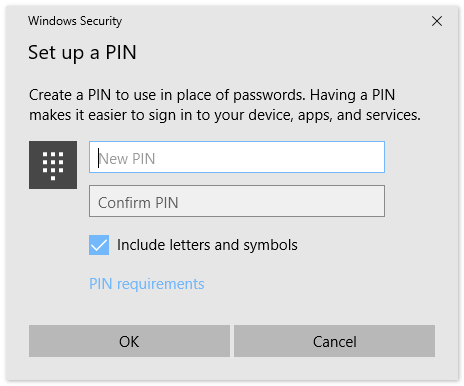 I have also had the same problem. The answer was not where I expected it to be.

Log on, cancel the PIN prompt as in the OP. Then, when you're at the desktop, click the Windows Defender Security Centre icon on the tray. Under "Account Protection", it should say "Set up Windows Hello for faster, more secure sign-in".

If you click "Set-up", it will prompt you to set up a pin, so don't do that. Instead, click "Dismiss" and that should be that. After doing this, my laptop stopped prompting me to set up a pin on logon!

Incidentally, while I had this problem, when I got to the desktop, I had an Explorer window that I couldn't get rid of. It was off-screen, but the taskbar icon was still present for it. The title of the window was "Microsoft Account". Task Manager showed it as not responding, and killing the task in Task Manager got rid of it successfully. This window did not re-appear after following the procedure above to get rid of the PIN setup.

These registry settings worked for me (I use Windows 10 Home with Microsoft account):

Not the answer you're looking for? Browse other questions tagged windows-10 windows-hello or ask your own question.

8
How evade "Your account requires a Windows Hello PIN"?
1
How do I disable Window Hello from appearing on the Lock Screen
0
Can't remove and/or dismiss Windows Hello