What is Windows's time server synchronisation precision? (and does it compensate the ping time?)

For the project described in Application of this question I need the best time clock precision possible, and one solution is to have a precise synchronisation of the computer's real time clock. 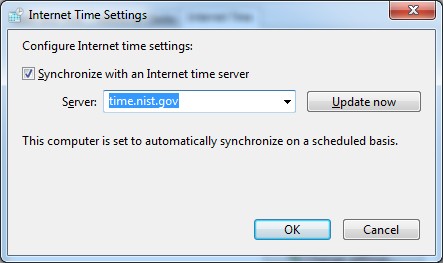 Very interesting question, so I did some digging into several sources.

The article Part II: Adjustment of System Time by Arno Lentfer from 2012 (PDF), contains many measurements and says this :

Windows synchronization to a network time reference has proved to not be very accurate. In particular, Windows versions VISTA and 7 seem to have lost some of the capabilities for some unknown reason. Unfortunately, there is not much information on this issue and the little information available basically says that Windows time synchronization should not be expected to be more accurate than a few seconds and that there may be a mishap in the behavior of SetSystemTimeAdjustment with respect to the meaning of the value of dwTimeAdjustment. Only Windows 8 has now overcome these drawbacks and its system time adjustment performs like it did on Windows XP.

The article notes that there are small errors that are built-in into the system clock, which does not in general keep exact time. The analysis shows that, with the examined hardware, system time may gain 0.0448 ms/s over the real clock.

The Microsoft article Support boundary to configure the Windows Time service for high-accuracy environments, concludes that the best you can hope for is 1 millisecond, using Windows 10 and Windows Server 2016 in a tightly controlled environment. Microsoft's documentation details the requirements for 1-second, 50-ms, and 1-ms accuracies, while older operating systems struggle to stay within a handful of seconds.

The Microsoft article outlines the requirements for a given accuracy :

Note : Run w32tm /query /status from the command line to see the stratum.

If you are wondering what is stratum, it is important to realize that NTP is a hierarchical, semi-layered system of levels of clock. The following diagram comes from the article Network Time Protocol (NTP) How accurate is it? by Dave Gault (PDF) :

The article also lists the factors that can have a detrimental effect upon the quality of time displayed:

This came out as longer than I intended. But to answer your questions :

What is the documented precision of doing a synchro with Windows 7's Adjust date/time > Internet time > Change settings > Update now...?

That depends on which of the requirements for the above Target Accuracy apply to your installation. If none of the above requirements applies, your time may be off by up to 2 seconds from real time. The NTP time server may also have an inaccuracy, depending on its stratum. Note also that you will experience a constant time drift when using the computer's real time clock, which you might be able to measure (or which might be available from the manufacturer).

More specifically, does it compensate the time server's ping?

The answer is no. That is up to you to measure, remembering that ping time may not stay constant.

Conclusion: If you need more time accuracy than is provided by the Internet time servers, you would need to acquire and use a specialized clock device.

Interesting reading is the Algorithmic Trading article Precision Timekeeping on Windows, which explains how Microsoft has improved its internal timekeeping functions and to what precision of the system clock:

If you wish to have your computer time synced with low-stratum servers via the Internet, you could use the free product Dimension 4 :

At an interval you specify, Dimension 4 connects to one of these Internet Time Servers, which you get to choose from an exhaustive list built direclty into Dimension 4. The Time Server then sends the correct time back to your computer, where Dimension 4 uses sophisticated algorithms to correctly adjust your computer's clock to with-in a few milliseconds of the real time.

You may also verify your computer clock against the website time.is : 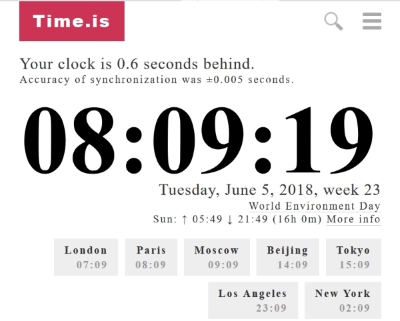 This is an attempt of time setting in Python, according to a NTP server, with compensation of the trip time of the packet between time server and myself (see Clock synchronization algorithm):

Not the answer you're looking for? Browse other questions tagged windows-7 ping time ntp or ask your own question.

16
I get “An error occurred while Windows was synchronizing with [name of time server].” when trying to automatically synchronise PC time
9
Why is my NTP controlled computer clock two minutes ahead?
1
Ping isn't acting accurate?
2
NTP Multicast configuration
0
Windows NTP Client Not Syncing with my ESXi NTP Server
0
How is time calculated between the Mobo/BIOS and the OS?