I want to leave the columns B and H blank, until data is entered in column D. How do i do that?

The formula in column H is =B-D 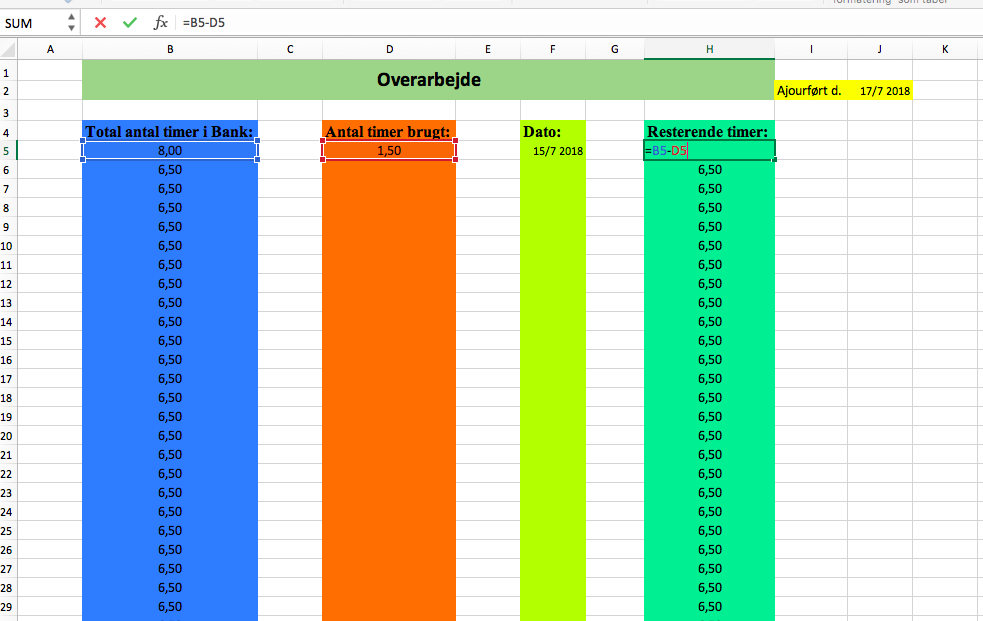 Assuming Column B is a static value of 6.5 or your data comes from another cell/sheet/workbook/formula.

Since I do not know where your values for column B are coming from below are several options.

You never clarified what data/formula you want to show in column B, so I will simply hardcode the initial 8 hours. To answer your question: How do I leave columns B and H blank, until data is entered in column D ?, enter the following formula in B5:

and copy down to B29

Note, that it is intentional, that cell B6 and down, fetches the display value from the cell in column H and previous row, where the remaining hours were calculated.

and copy down to H29

Image after 1 hour entered in D7

To execute the entire scenario successfully, you need Helper Column like I've created in Column A. Since Hours used in Bank is mandatory. And it should never a fixed value.

This may not be strictly what you were asking for, but hopefully it's better.

The result just after Tab has been pressed after typing 2.5 in the Hours used: column can be seen in this screenshot:

The worksheet is to be set up as follows:

Enter the following formula in B6 and ctrl-enter/copy-paste/fill-down the rest of the column as required:

Enter the following formula in column H where appropriate:

Note that an entire column reference can be used instead of the specific cell reference to refer to cells in the same row as the formula itself. (The "normal' formula would, of course, be =IF(ISBLANK(D5),"",B5-D5) entered in H5.)

As you can see, this enhanced solution pre-fills the next cell of the Banked hours: column with the amount of remaining hours.

In fact, the whole table can be improved by removing the Remaining hours column entirely:

Enter the following formula in B6 and ctrl-enter/copy-paste/fill-down the rest of the column as required:

This formula refers to the cells in the previous row rather than the current one.

1
Finding non blank cell then in same row if another cell is blank then return value of another cell
0
In Excel 2013 show cells as empty or blank until data is entered in other cells
0
Leave Cell Blank Until a Value Is Added
0
Leaving a cell blank until dates are entered
0
Leaving a cell blank in excel until the data is entered, but if it is = or < then zero I want zero to be entered
0
Hide Formula Results Until Data Is Entered
0
Keep Cell Blank When Applying Formula Until Data Entered - Using "Dates"