This is a problem that emerged a few months ago and couldn't find a solution for, the favorite keys do not work anymore in their normal use.

By normal use, I mean pressing the key to open the program in task bar; if you hold the key to show pinned items or hold Shift to start the program as administrator, they all work.

So it is definitely not a hardware issue, the keys are all working.

Here's a screenshot showing the faulty keys in blue:

I have tried the following without success:

By looking at mskey.exe, there is definitely something wrong as Ctrl is being emitted by the key, obviously this won't work even when tried for real: 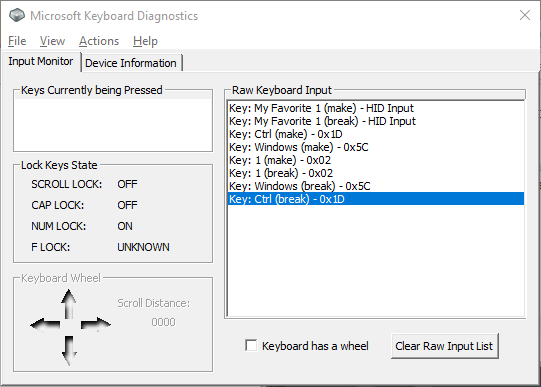 Has anyone experienced the same issue and found a fix for it ?

I ultimately ended up with five AutoHotKey scripts that work rather well. I've lost the functionality of pinned items but since they require both hands for selection, I guess it's okay to press an extra key with the hand.

The most important part is working and that's a good thing, because switching hundreds of time per day to different programming software, you can imagine that typing thrice as much keys is extremely boring to say the least.

For ones who might have the same issue, here's the first script:

Change the last block key for the four other scripts, compile as EXE with Ahk2Exe and you're set !

After trying to track down the cause of the problem, to me, Windows Version 1709 (Fall Creators Update) has introduced a regression inducing this problem. It is roughly at this time that I've started encountering this problem (I do install updates as soon as they become available).

Tried on Windows 7 and they effectively work as expected, one mystery though, the Ctrl key is also emitted but seems to not be ignored anymore on a recent Windows 10 version, therefore causing these keys to fail.

Not the answer you're looking for? Browse other questions tagged windows-10 keyboard hotkeys or ask your own question.