Email ID with dash at the end of local part

Is it a valid email if the email has a dash (-) at the end of local part of an email? For example,

Google says it is invalid, so for the time being I assume it as invalid too, though RFC excludes only [dot] character from starting with and/or ending local part. 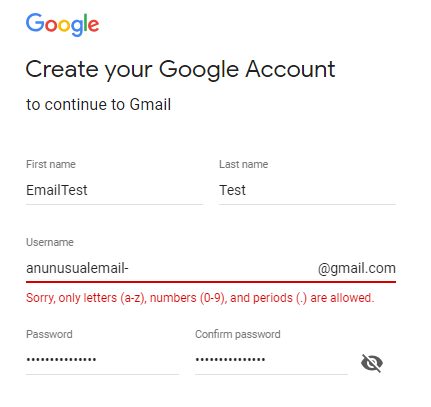 Note: I'm not concerned about the domain part, because that become more involved due to the way DNS, which complicates the question and answers.

Is it a valid email if the email has a dash (-) at the end of local part of an email? [...] Google says it is invalid, so for the time being I assume it as invalid too, though RFC excludes only [dot] character from starting with and/or ending local part.

It's valid. You're only seeing it rejected by Google because it performs a completely different check – they have their own policies on what the local-part can be, as do many other providers.

Google, or anyone else, would be obligated to accept all possibly valid email addresses only if the form was actually asking for an existing, valid email address (possibly from provider). For example, it would be an error if Gmail's To:/Cc: field rejected a valid address.

But the field you highlighted doesn't ask you for an existing email address; it asks for an account name on Google systems, which will be the basis for an email address only once the account has been created. There is nothing that would forbid Google, or anyone else, from limiting the set of valid account names (or, really, even mailbox names) on their own system.

Or, in other words, defining the allowed characters for 'local-part' only means that mail applications SMTP servers must accept such addresses in RFC 822 headers and SMTP commands – but it doesn't say anything about being able to create such mailboxes. (Indeed, back when the early email RFCs were written and most mailboxes were still tied to OS-level accounts, their names had similar or even stricter limits.)

For example, this part of RFC 5321 (section 4.1.2, below ABNFs) explicitly says that a receiving host is allowed to and indeed should have much stricter limits on how its own mailboxes are named:

So, although anunusualemail-@gmail.com is valid syntactically, that alone doesn't mean that Google must allow you to create it.

G Suite (formally Google Apps for Your Domain) does allow hyphens (dashes) within email addresses, even as the last character.

As you noted, Gmail does not allow hyphens in email addresses.

Not the answer you're looking for? Browse other questions tagged email or ask your own question.

0
Create my own, local-only email, @example.com?
1
Ensure email delivery with email server
2
How to send a customised multi-part email
1
I can send local email successfully but the recipient does not get the email
0
Sending email from LAN PCs to local email server
4
Is there a way to easily respond to part(s) of a long email?
1
How does this email display part of its text selectively?