A couple of days ago I noticed that for all websites, chrome omits from the address bar the protocol and the subdomain if it is www. My co-workers report that they are not seeing this. Chrome version is 67.0.3396.87.

For example, if I type into the address bar https://www.google.com (without the quotes), Chrome immediately displays the chip "Secure" followed by google.com. See attached screenshots.

I have looked in vain for Chrome settings that affect this, plus the chrome://flags page and chrome://net-internals page.

I did not do anything consciously to make this change.

EDIT: Suggestion from MrWhite that Ominbox UI Hide Stead-State URL Scheme and Trivial Subdomains had become enabled: good suggestion, except that the setting is still at “Default.” See screenshot:

However, as a shot in the dark, I am going to play with the setting to see what happens.

First I set it to “Disabled.” That restored the previous behavior of the address bar, which is to not to hide the protocol and “trivial subdomains.” Then I changed it back to “Default,” and it was hiding them again. One would suspect that somehow the default has been changed, except that co-workers are not reporting this issue.

Oh, well. I’ll just leave it as Disabled for now.

I would be ready to accept the answer from MrWhite, because it provides a workaround. Yet will leave it open for a bit longer, because it does not really answer why this behavior has changed, and why it has to be overridden.

The behaviour you are seeing is consistent with having the "Omnibox UI Hide Steady-State URL Scheme and Trivial Subdomains" setting enabled within chrome://flags.

Returning this flag to "Default" (or "Disabled") and restarting the browser (prompted) should get your scheme + subdomains back. This is on Chrome Version 67.0.3396.87 (Official Build) (64-bit) - Windows.

Except checking that setting does not show "Enabled"; rather it shows "Default".

As far as I can gather, whether "Default" means "Enabled" or "Disabled" is built-in to the Chrome executable. So, this is primarily version dependent. Note also that settings vary between "Developer" and "Stable" builds.

Settings can also be enabled/disabled in command line switches. So this is another area that is worth checking. Reference: https://peter.sh/experiments/chromium-command-line-switches/ - although I don't see much relating to the Omnibox in this list.

UPDATE Sept-2018: As noted in another answer, from Chrome Version 69 (tested Version 69.0.3497.81), this feature now seems to be enabled by "Default". So, you must explicitly set this to "Disabled" to remove this feature.

UPDATE Aug-2019: This option/flag has since been split into two (possibly since version 72 - according to @Kyborek in comments):

The "Default" setting is enabled, so these options must be explicitly set to "Disabled" to get the "Scheme" and "Trivial Subdomains" back in the URL address bar. (Note that the insecure "http" scheme/protocol is always hidden, regardless of this option.)

There is also a new(?), rather ominous, option: "Omnibox UI Hide Steady-State URL Path, Query, and Ref" which currently (Chrome version 76) appears to be disabled in its "Default" state. Something to keep an eye on though!

UPDATE Nov-2019: Unfortunately, it seems that since version 78 these flags have now been completely removed from the UI.

However, whilst these flags appear to have been removed in the UI, if you have previously disabled these flags in an earlier version then the options appear to stick and the "trivial subdomains" and "(HTTPS) URL scheme" remain visible.

UPDATE Dez-2019: As stated in another answer below, you can install Google's Suspicious Site Reporter extension and the protocol + subdomains are back.

The chrome://flags entries are temporary and will be removed in the future versions of Chrome.

It works because Chrome/Chromium explicitly checks whether the extension is installed and enabled using its id and toggles the URL elision feature accordingly.

For those who don't want to install Site Reporter extension

The only required part of that extension is an excerpt from manifest.json shown below, no other files needed.

You can install it in your browser as an unpacked extension. It should be trivial to install on Linux or MacOS. As for Windows, only the Canary channel supports unrestricted installation of unpacked extensions as far as I know. Some Chrome forks support it too. In the official stable Google Chrome on Windows you will have to use an elaborate trick to avoid a warning on each browser start.

This zero-weight extension uses the same id as the Google's extension so you can't have both of them installed, but you only need one anyway. Note, since the id is the same we can't upload it to the Web Store.

It is now default setting for chrome://flags/#omnibox-ui-hide-steady-state-url-scheme-and-subdomains

It will now also strip some other subdomains like "m.domain.com" to "domain.com", so "www.m.www.m.example.com" will show up as "example.com" in address bar unless "Omnibox UI Hide Steady-State URL Scheme and Trivial Subdomain" is set to disabled in Chrome 69

Additionally to the existing answers it keeps to mention that changes in the browser settings are not really required to get access to the full URL. Simply double-click in the URL-bar and you'll see it completely.

The chrome://flags/#omnibox-ui-hide-steady-state-url-trivial-subdomains has unfortunately been removed in Chrome 76, but there is a very easy trick to show the protocol and subdomains again.

All you have to do is to install Google's Suspicious Site Reporter extension from the Chrome Store and the "https://www." will start showing in address bar.

As we can see in the source code, the protocol will not get hidden if this extension is installed:

Navigate to chrome://flags/ and set these three flags to "Disabled":

Answer for Chrome/Chromium 78 and newer:

While the settings are gone from the chrome://flags/ UI in Chrome 78, there is still a way to disable this behaviour by editing the Local State setttings file. There was a howto in the Google Forums that's now censored by Google, but you can still find it in the Google Cache

Basically it comes down to

These instructions are from https://jdtechservices.net/tools/.

The first method, which I prefer, is to add a parameter to your Chrome shortcut inside the target field:

If you are using Windows it will look like this: 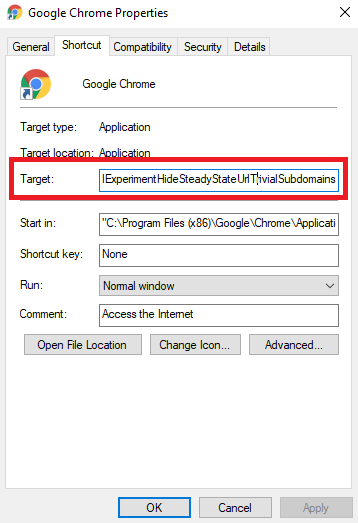 The second method is to install an extension, but this will consume some memory:

Not the answer you're looking for? Browse other questions tagged url browser google-chrome or ask your own question.