How can I consolidate some data but keep other data in tact? In Excel 2010

I want to combine rows with duplicate employee names and sum the hours.

I have tried pivot tables and consolidate functions and they don't quite display it the way I'd like.

I tried the pivot table next. It worked except... I could never figure out how to get all the data to display each in its own cell like the original spreadsheet. It keep wanting to stack the department numbers under the name instead of in a cell next to it. And when I tried moving it to values, then it wanted to sum the dept numbers. I spent a LOT of time rearranging the pivot table and reformatting each field value setting. When I selected the data initially and clicked insert pivot table, it took all the data and stacked it on the left in a unusable format. I spent ages rearranging all the fields and changing the view... I don't know if a pivot would work. If someone does suggest a pivot, I need a little help with setting it up, what goes where.(in regards to the 4 boxes, drag and drop, you know, row labels, column... etc) and with the value settings.

But maybe there is a more simple way.

My goal is to combine the names and sum the hours while keeping the file number and department numbers in tact and in the same format more or less.

I can't attach the file, but this is how it's set up... the columns are titled like this starting at column A: File#; Name; Home Department; Temp Department; Reg Hours; OT Hours; Sick hour; Vacation hours; Straight OT;

And there are multiple entries with duplicate names 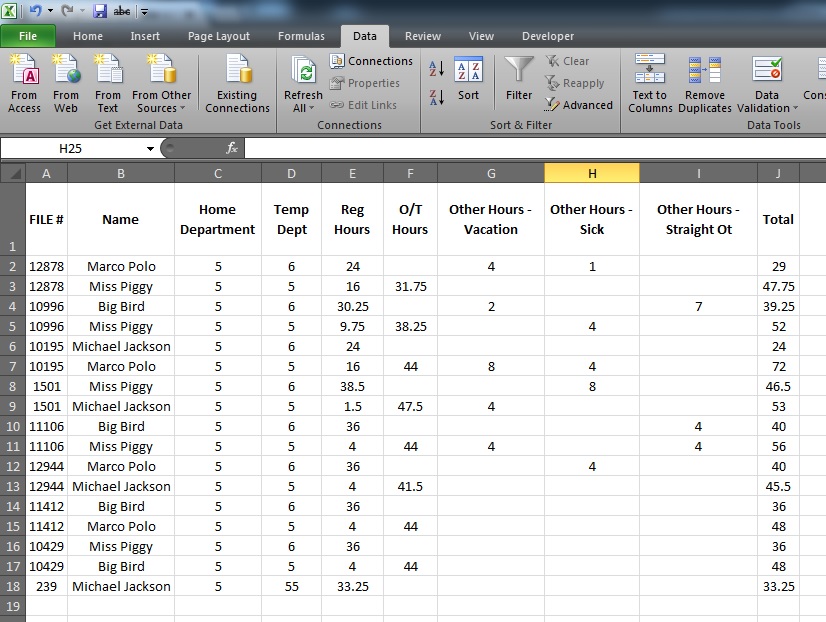 For this to work, you will need another table with a complete employee list:

I used a simplified version of your table:

2
Copy information to one cell based on what's in the cell next to it
0
How to display only data that meets certain criteria in Excel
0
Creating a new spreadsheet from two others
0
How can I find cells in Excel whose values are not in increments of 0.25?
0
Excel Pivot Table - How can I return a date in the row value?
0
How to combine the totals of four sheets into one
1
Excel: Combine multiple rows but keep column data?
2
Count each time the same value appears for a person, resetting when a new value is displayed
0
How to use SUMIFS to combine data from multiple tables to a Master Sheet in excel?