How does the “Compatibility Mode” in Windows work?

How does the Compatibility Mode in Windows work internally? 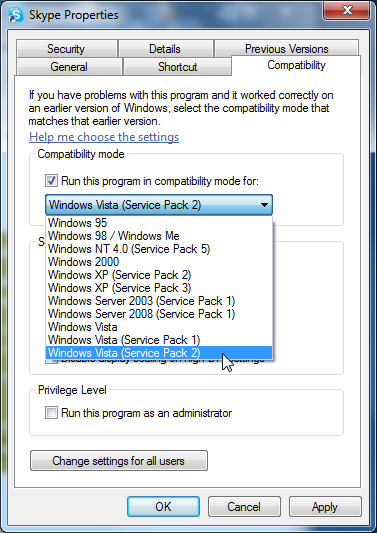 Compatibility mode is achieved using so called shims. There is a good article on TechNet describing how these work.

Since shims are just a layer between the application and the Windows API a shim can just do what the application could do itself. The shim cannot be used for example to circumvent UAC or access protected files.

If you want to know more, here are some links you might find interesting:

Especially Microsoft Application Compatibility Toolkit is worth a look. This tool gives you an overview over the applications with known issues, all available compatibility fixes and modes and which fixes are applied to each application.

I think a lot of different things happen. A straightforward example is that a program might check your windows version, but get confused by the return value of a new operating system. So using compatibility mode would tell windows to report a wrong version. Raymond Chen mentions some more things: http://blogs.msdn.com/oldnewthing/archive/2003/12/23/45481.aspx#45590

My knowledge of Compatibility Mode is that it causes several Windows system calls to lie to the program.

One obvious example are the functions GetVersionEx and GetVersion which report the specified Windows version instead of the real one.

This article does a good job of explaining it.

Not the answer you're looking for? Browse other questions tagged windows compatibility or ask your own question.

1
Windows 10 made most of my games stop working
0
How can I set the compatibility mode for an executable even in all folders?
2
Windows 7's Compatibility Mode Behavior
0
program compatibility only works in test mode
1
Get more compatibly modes