Firstly, this may look like it should be in security or something more 'virus related' but this is now after a fresh format and reinstall so it really shouldn't be that. (Thought I'd nip that response in the bud before this goes off track...)

So to the question at hand, after a recent large-ish update (sadly I did not take note of which update) to the Insider Preview build, sections of my system are showing text in this interesting format and I wanted to know if anyone else has seen this or, even better, knows what is up?

I did also enable virtualisation for Docker at the same time so maybe that could be related as well?

For example, an event log soon after the installation:

Through my searching I have found only one similar post (“Windows Update” text using strange characters) but nothing else... I'm sure the characters are also making the search less successful but nothing comes up if I type out the text either.

Here's a great screenshot example of what I'm talking about: 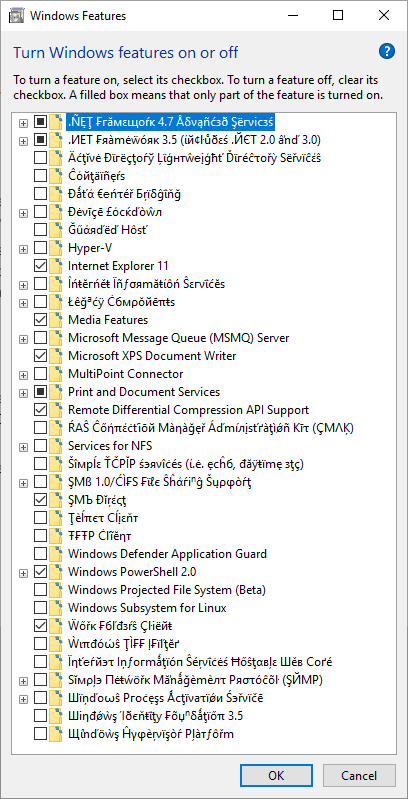 More recently it does seem more "attack-like" but again, it's a fresh install and the only tools I've installed are gaming related (the main if only reason for my Windows build at the moment) and those are just the big clients like Steam and Origin... so it's highly unlikely to be a bug I've installed. But the messages are along the lines of:

Don't get me wrong though, I do realise there is always a chance it's a virus of some sort (especially with it seemingly focused on the security sections of the system) but it seems unlikely considering my points above...

Another thing I thought it could relate to are the account sync options? I wonder if there's a theme or font being synced that could do it, though that would not be section specific then I'm sure.

I've attached a security center screenshot as well so I'm interested in if anyone knows what might be going on? 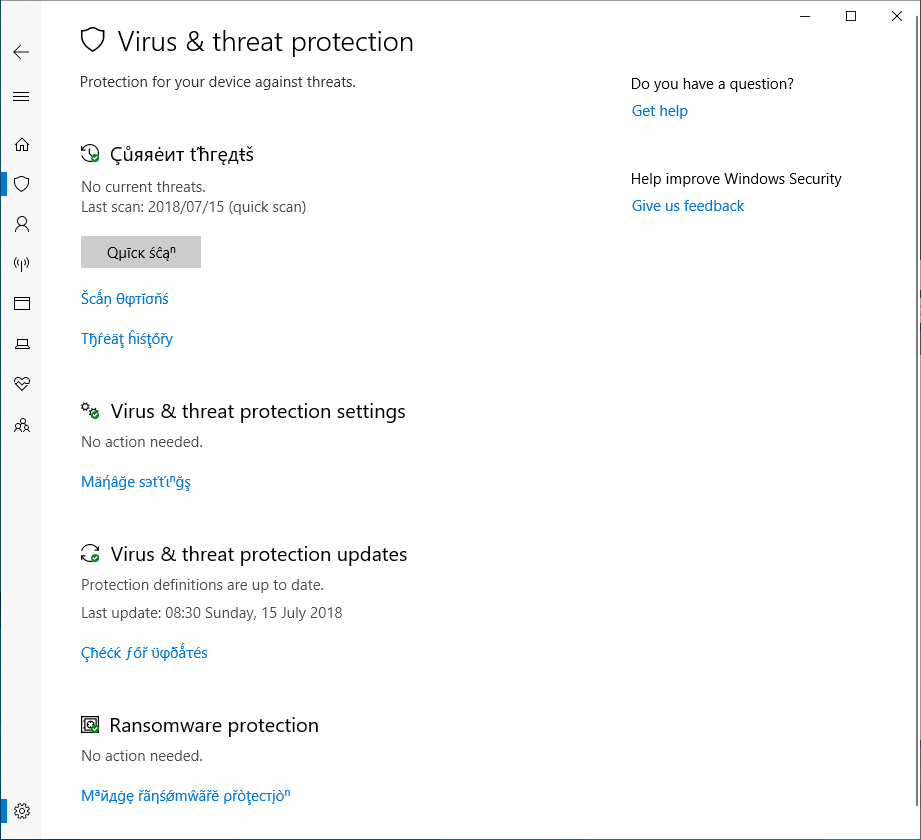 I wanted to know if anyone else has seen this or, even better, knows what is up?

First the good news, it's not a virus.

You are seeing the effects of something called Pseudo-Localization, and it is a known thing with some insider preview builds that have the language set to something other than en-us.

To fix the issue change your language to en-us. 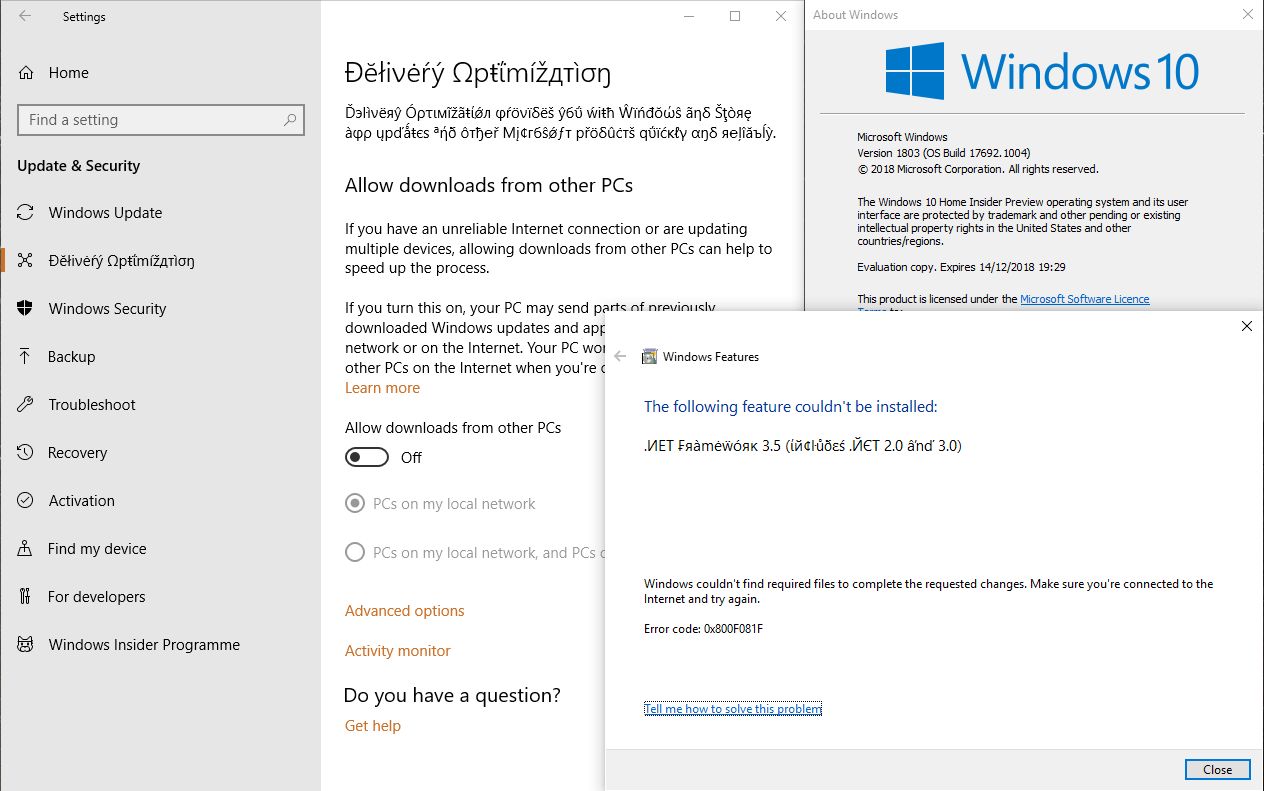 That's pseudolocalization used to test compatibility across different languages. Microsoft and others have been doing it for years now.

During most development, the only language that has 100% coverage is en-us because 100% of primary development on Windows is done in Redmond.

Running non-US locales on insider builds, especially in Skip Ahead and Fast Ring, are only shipped with en-US and Pseudoloc'd locales. OP is definitely using en-UK ("programme") which means that a large number of strings are probably pseudoloc'd. This helps identify non-localized strings

it's weird enough that it won't make it into retail through an automated check (there's a lot of zero-width spaces in there, too, which aren't allowed in normal translations for the most part).

My name is Miki Albertson and I’m a Program Manager from Windows Localization team. Today I would like to give you a behind-the-scenes look at how WDG products are made available to Windows Insiders in their language. By the way, we call this process “Localization”.

Second, we use a process known as “pseudo enhancement” within the existing localized builds to allow us to mark new or changed UI strings that have been exposed to localization, but have not yet been localized. For some non-Latin based languages, this can involve adding some random localized characters at the start of the unlocalized string as an identifier; or in the case of Latin-based languages we replace the existing characters in the string with accented versions. If there are unlocalized (i.e. English) strings in the build that don’t have those characters, this is potentially a bug and could potentially delay the project. (Please see below for examples of “Pseudo Enhancement”) 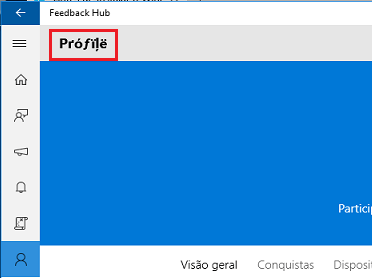 With Windows as a Service, validation through the Pseudo Localization Tool is often done parallel to our translation work. Once those resources have been translated, Pseudo-enhanced characters that were added to the resources will be removed. Also, for those resources that are not yet localized, the process is to turn off Pseudo Localization tool before we release to Insiders, but sometimes due to this not being done as expected, you might see the pseudo strings in the Insider Preview builds.

Not the answer you're looking for? Browse other questions tagged windows windows-10-preview security-center or ask your own question.

178
What is the purpose/function of ".ßßß" files?
2
Open Office is not showing in English, even though the English language is selected

2
Is there a Windows keyboard shortcut to combine accent marks with other characters?
0
Please help me find what is attempting to start Notepad.exe
0
Trying to remove the Windows 10 Technical Preview but Windows Update KB2990214 does not exist on my computer
7
How to add & remove windows 10 pin sign-in?
0
Windows 10 Insider Preview causes blank screen
1
Updating to latest Windows 10 Insider Preview build does nothing, it restarts as normal
1
Just opt-in Windows Insider fast ring but it is not finding updates?