PuTTY crashes when the program tries to exit. When it crashes, the window will freeze and will not close no matter what. Force close will not work, the task manager will not work. pskill from pstools (using administrator command prompt) has no effect-- it says the process has been killed, but it remains. Nothing will make the window go away except for a computer reboot.

This has been happening for a few weeks, possibly caused by a recent Windows update, but that's just a guess. It doesn't happen every time, but maybe 50% of the time. It crashes whether it is a manual exit invoked by typing "exit" or "logout", or when it exits itself because the computer has gone to sleep.

It only happens when I use port tunneling. I always have several PuTTY windows open, and the only one that crashes is the one with a port tunnel open.

Before the most recent crash, I opened the PuTTY log to see what it said. The final line was "Server sent command exit status 0", which seems normal.

Here is a screenshot of my port tunnelling settings, in case that's relevant: 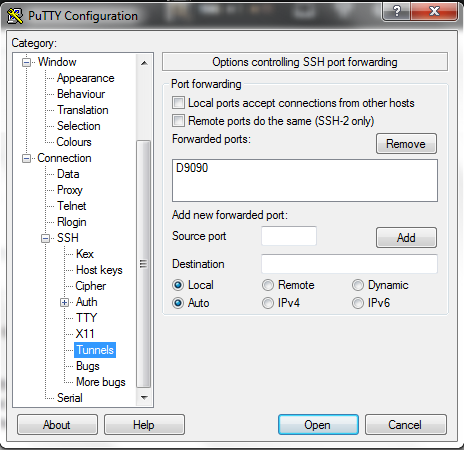 Here is the Windows error box, which identifies the type of error as "AppHangB1": 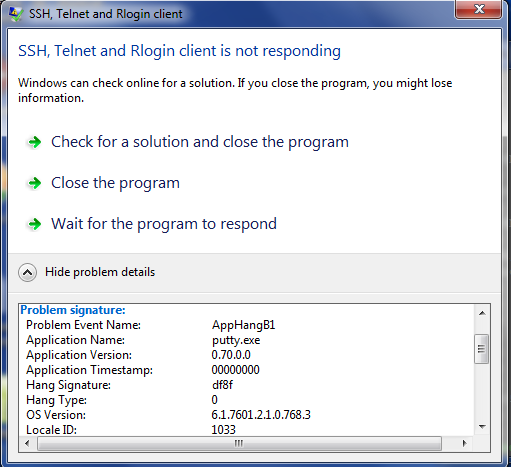 Google has given me zero results. Searches for this type of crash have told me that it's often caused by a buggy driver, so that's one possible avenue, if anyone knows what I should try to update/roll back.

I updated PuTTY to the most recent version to no effect. I have not tried updating the remote computer (which I control) or my router, but I'd hope that neither of them are related to this kind of crash, which seems related to Windows itself.

The following functions are trying to enter this critical section

The following module(s) are involved with this critical section:

It has been nearly a month without a crash, and in that time there has been another Windows update. The timing is too coincidental; I think this must have been caused by a Windows update in the summer, probably July, and fixed in the August update.

In the configuration settings of PuTTY, the setting of "Close window on exit" may take part in the problem, so try to test its other available settings.

You may also try an alternative free product, one of : KiTTY, MobaXterm, or Bitvise.

If one of the alternatives works for you, then first you have a workaround for the problem. Second, the problem itself is then probably some difficulty in the communication protocol of PuTTY with the remote computer, and you should report the problem to the developers.

PuTTY crashes when the program tries to exit. When it crashes, the window will freeze and will not close no matter what. Force close will not work, the task manager will not work. pskill from pstools (using administrator command prompt) has no effect-- it says the process has been killed, but it remains. Nothing will make the window go away except for a computer reboot

I call that a "hang" and not a "crash". Crash means that execution continues either returning an error message (nice) or in the case of severe memory corruption there will be a pause (usually short, sometimes somewhat lengthy, rarely a watchdog) and execution will continue with a BSOD or reboot (not nice).

With a "hang" no amount of time waited will seem to further your progress, though other threads may continue to run normally if your Task Switcher is not affected and can switch to them.

Quite possibly what has happened is that PuTTY has spawned a VPN subroutine in order to tunnel, and that process has a problem; it has not returned to PuTTY and so PuTTY is hung.

The other process could have a temporary file open or a Port; termination of PuTTY might well close the subroutine but probably not remove any lock on files or ports from subprograms.

How to find out for certain - What is going on?

Reading a Microsoft Community webpage about that error titled: "Windows Explorer 7 is not responding - 'apphangb1 explorer.exe' error" it says:

Create a hang dump of the Windows Explorer:

compress the crash dump as 7z or RAR and upload it to your SkyDrive and post the link here.

Create the dump but you can analyze it yourself, or after searching all the SE sites for a duplicate question ask us: "How do I work with a .DMP file?".

Following that link to the webpage: "Creating memory dumps" it says:

"Memory dump from an application/process that is HANGING (not crashing):

(where "appname" is the .exe name of the application that is hanging)

Memory dump from an application/process that is CRASHING (not hanging):

(where "appname" is the .exe name of the application that is crashing)

See this Microsoft Support webpage: "Debug Diagnostics Tool v1.2 is now available" where it describes usage of the DebugDiag tool.

To debug a process hang, or slow performance use one of the following:

Whatever the problem you can locate the exact point and find out which process is at fault and debug it. If you have a question about the use of those tools feel free to check for and ask a new question.

It sounds like you may be having an issue with winsock filters, and your application is locking up on some sort of driver/IO issue.

In an administrative command prompt try: netsh winsock reset then reboot, and see if that makes a difference.

Off of the top of my head here are some other things to try:

I have found the answer at Microsoft Community.

Not the answer you're looking for? Browse other questions tagged windows-7 ssh crash putty ssh-tunnel or ask your own question.

0
Windows 7 BSOD Crashes
0
Causes of hard crashes on Windows XP and how to debug
1
Computer slows down, freezes, and then crashes
8
Is there a way to make putty automatically “close window on exit” from the command line?
4
Computer crashes if left unattended AND running uTorrent, what could be?
0
Windows 7 PC crashes / stops upon reboot
0
Why did windows update break WinSCP and PuTTY?