I have a problem that I'm hoping someone with more knowledge can shed some light on. I recently received a Razer Goliath 5.1 Soundbar for my birthday, capable of accepting input through Aux, Bluetooth, and Optical cable.

My motherboard is only capable of outputting stereo over SPDIF, so I bought a Sound Blaster Z sound card (which promises 5.1 over optical). Sadly, I've had only headaches and issues since I installed the damned thing.

I've managed to overcome most of the other problems that I've had with the card, however even as I type this out my sound has dropped out almost a dozen times - it simply stops playing through the speakers.

In the beginning I would restart my computer, and things would simply work again. More recently I've discovered that switching the encoder version in the Sound Blaster Z Control Panel to anything else, then back to Dolby Digital is enough to get my sound playing again. 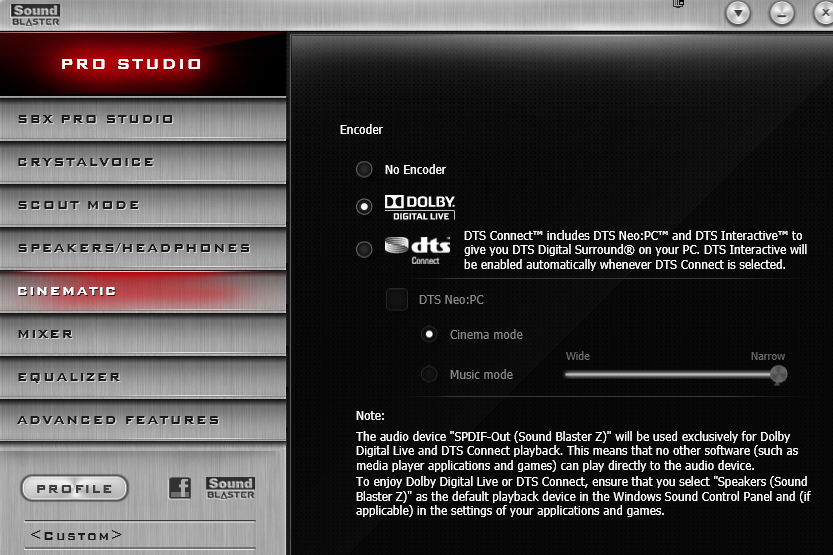 I tried installing the newest drivers for both the card itself, as well as the Sound Blaster Audio Controller, and even newer/older versions of Sound Blaster Z Control Panel; nothing's worked, so I'm hoping you guys may have some insight.

So I've sort of managed to solve the problem, and want to post this answer for the sake of anyone else encountering a similar issue. First of all, make sure to install the latest drivers, and version of Sound Blaster Z Control Panel.

When outputting over SPDIF (Sound Blaster Z), I selected "No Encoder" in Sound Blaster Z Control Panel, and enable the Dolby Digital setting on the speakers themselves (there's a button to toggle it on or off).

The sound coming out over the Leviathan seems to be 5.1, however it's difficult to tell because, duh, it's a soundbar, and all the speakers are right next to one another, and unfortunately the Sound Blaster Z Control Panel loses all ability to interact with the bar itself (I can't test the speaker output). It sounds good, however.

With this setup I've had no drops, and no grief.

I have the same card, I think some clarification on what it does is needed:

You need to use Dolby Digital Live! encoder and the 5.1 speaker setting (not SPDIF) for it to ENCODE 5.1 In REALTIME and send it over it's SPDIF. This is only required for games that have realtime surround sound, it takes the audio from the 5.1 channels from the game and encodes it in real-time to Dolby Digital 5.1 (hence the name Live). The receiver/soundbar getting this signal will see it as Dolby Digital 5.1. A Dolby Digital 5.1 encoded stream can be sent over SPDIF's 2 channel bandwidth, so this is a lossy encode, compared to sending the audio uncompressed, which SPDIF can only do 2 channels of, so you would need to use HDMI, but it seems like your soundbar doesn't have HDMI so have to use SPDIF.

Going back to the sound cutting out problem, I just switched computers and am getting this issue too, not sure what it is, didnt happen on my old machine, but yes, switching the encoder to none and then back to Dolby Digital Live! fixes the issue. I will try the fix listed in this thread though.

But why do you need 5.1 for your soundbar, it doesn't actually have the rest of the speakers for surround? You could probably pass it 2 channel stereo and it would sound similar.

I had the same issue for almost 18 months before I realized accidentally that updating my bios solved everything.

Over those 18 months I've tried replacing everything from the sound card to the cables, to the receiver and even the TV itself.

Not the answer you're looking for? Browse other questions tagged windows-10 audio sound-card surround-sound spdif or ask your own question.