How can I add additional fonts to the Windows console?

I found a guide online stating that you need to edit the registry in order to add new fonts to the list of available fonts in Command Prompt: specifically, you have to edit the key:

by adding string values with keys 00, 000, 0000, and so on, with their values being the names of the fonts. I've already done this. I added the font names to the registry, as you can in the screenshot below, and restarted the computer:

However, the fonts which I've added aren't showing up in the list. More specifically, I added Inconsolata and Source Code Pro. But I don't see them in the list of available fonts: 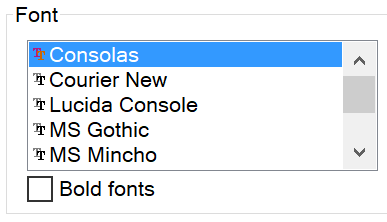 How to add new fonts to your Powershell (Or CMD) Console settings?

First thing to know, is that, unfortunately (!):

Only fonts fulfilling certain criteria can be installed into the console!

The Font Criteria + Explanation
(The current status of this is unknown.)

For Font to be supported in Console they have to:

What does all that mean? Most of these metrics are defined here, which outlines the following structure describing a font in C++:

However, one known font to work and that has been suggested because it supports a lot of useful glyphs and math, is DejaVu. Unfortunately it is not part of the Windows standard font selection and need to be installed manually.

If the font you need doesn't already have a TrueType font file (*.ttf) or OpenType (*.otf), you will need to convert the SFD files into TTF (or OTF). To do so, you can use FontForge to import SFD and then generate the TTF.

Done. The new font is now immediately available in your registry.

Load the new font(s) into the Console registry

Open a Powershell console as Administrator to do this.

However, you will not see the new font items, until:

Enjoy the many new and correct glyphs! 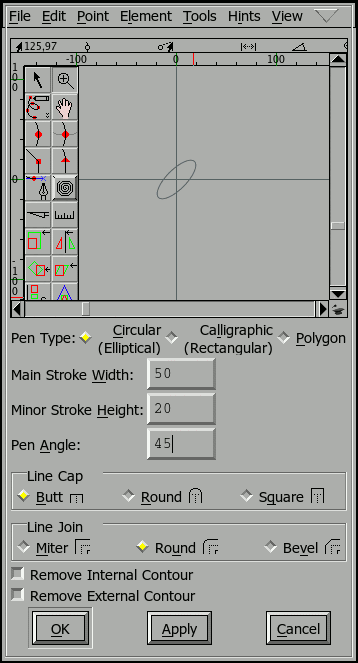 The Expand Stroke dialog gives you control over various aspects of the expansion process. First you can specify three types of pen nibs:

For circular and caligraphic pens you can chose a stroke width, how the ends of an open path should be drawn, and how the path should look when two splines (or lines) join which do not have the same slope (ie. at a corner point).

Not the answer you're looking for? Browse other questions tagged windows command-line windows-registry fonts or ask your own question.

45
Merging two fonts
4
How to add a font to the Cmd window choices in Windows 7 64-bit?
2
How to add additional fonts to the Windows console windows

6
Add other file types in the “New” context menu
4
How to add a font to the Cmd window choices in Windows 7 64-bit?
3
Adding Microsoft console (CMD) font in registry does not work with Eastern Asian language for non-unicode programs
16
Some Unicode fonts not working in Windows 7/Firefox
5
Lost my Fixed width font in chrome in windows 7
128
Unable to install fonts on Windows 10
3
How to set TLS protocols as default after applying KB3140245?
4
Change font for non-legacy command prompt in Windows 10 with non-ASCII charset - Properties vs default values?
1
Why does windows registry of fonts indicate they are all true type?