Excel - How to return different match values with other formulas?

I have the following table and resulting formulas: 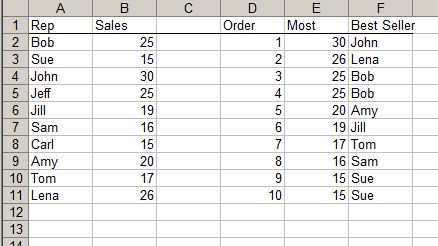 First I have the sales person and the number of sales.

Then in columns D and E, I want to know who are the best salesepeople.

The problem is that 25 and 15 each show up twice for Bob and Jeff and Sue and Carl. But in column F Bob and Sue show up twice because Match returns for the first match only. I need 25 to list Bob and then Jeff and 15 to list Sue and then Carl.

The way I was looking to do it is to check how many times the the value in E appear. If it appears multiple times, then find which instance of that value the cell is next to and then find that value from the Match of the name. So for 25 with 2 values F4 is by the first 25 in E so it would return Bob, and F5 which is by the second 25 would return Jeff.

Sounds simple, but I have not been able to put it in a working formula. I am trying to have a single formula in F giving the desired results.

Use AGGREGATE as a SMALL function to return the correct row to INDEX:

The COUNTIFS($E$2:$E2,$E2) will return 1 for the first and 2 for the second instances of the number, thus forcing the AGGREGATE to return the first then the second name.

1
Excel: Matching and counting records (rows) to multiple conditions and unique values
3
Excel Formula-Return Value based on looking at two separate values (either/or)
0
How to ask excel to do sequenced formulas in single cell
0
Random Sample in Excel with Conditional Statement?
0
Combining multiple excel formulas
0
Excel Formula - Match Duplicate and Highlight with different color
3
Return list of all values that match Two criteria
0
Having issues with two Excel formulas
0
Return List of Values That Match One or More Criteria