What's the difference between intranet, extranet and internet?

What's the difference between intranet, extranet and internet?

For better comprehension, take a look at this drawing: 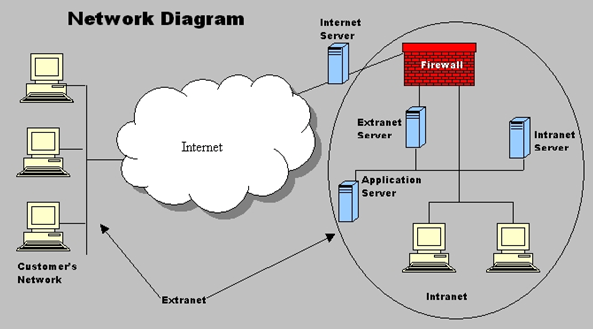 The Internet, extranets, and intranets all rely on the same TCP/IP technologies. However, they are different in terms of the levels of access they allow to various users inside and outside the organization and the size of the network. An intranet allows for restricted access to only members of an organization; an extranet expands that access by allowing non-members such as suppliers and customers to use company resources. The difference between the Internet and extranets is that while the extranet allows limited access to non-members of an organization, the Internet generally allows everyone to access all network resources.

Not necessarily definitive definitions, but Wikipedia defines them as follows.

An intranet is a private computer network that uses Internet Protocol technologies to securely share any part of an organization's information or operational systems within that organization.

An extranet is a private network that uses Internet protocols, network connectivity. An extranet can be viewed as part of a company's intranet that is extended to users outside the company, usually via the Internet.

The Internet is a global system of interconnected computer networks that use the standard Internet Protocol Suite (TCP/IP) to serve billions of users worldwide.

Intranet is used for things that are probably more secure than the Internet. For example, those .mht archives on your desktop are probably more secure than .com. Therefore, your .mht archives are given higher privileges (depending on your internet settings) to doing stuff. Another example would be other computers on the network, if you're in a company. Anything transmitted to you by a coworker might be more trustworthy (at least, to IE*) than .com.

The Internet zone is for letting you surf the web. If you go on a bad site, it will be harder to attack them than with Intranet on. With Intranet, it'd probably be as easy as taking candy from a guy saying "free candies!" (Although, don't eat those candies; they may be poisoned).

*BTW, IMHO, IE is a lot less secure than something like Mozilla Firefox (aka "the most secure browser yet"). I use Google Chrome, though, but at least Firefox is better than IE. (Also, please don't downvote me just cause you're a Micro-softie; this is just my opinion.)

Basically, it is a way of internet explorer to let configure the browser so that different web applications are given different access control rights:

The difference mainly lies on

As @digitxp said, it really isn't wise to use IE anyways, unless you are bound to use it by some IE only sites, intranet or not.

An extranet is a computer network that allows controlled access from the outside, for specific business or educational purposes. An extranet can be viewed as an extension of a company's intranetthat is extended to users outside the company, usually partners, vendors, and suppliers.

2.Intranet means a single organization where share information can be accessed through a organization.

3.Extranet means a shared accessed content through a organization and also another organization if they permitted.

5
What is the difference between a LAN and Intranet?