Before writing the original issue I am facing, I think it'd be best to provide some background.

Background I was trying to register a new source to get packages when running apt-get to finally install azure-iot-sdk-c-dev to use the code to communicate to IoT Hub.

I ran in to issue when tried running the following command.

From the error it seemed that my PI doesn't have dirmngr directory. So I started looking for solutions. One of the solution was to use the following commands

Issue It is giving me errors like sudo: apt: command not found to fix that I tried the following

But both errors out stating -bash: apt-get: command not found

EDIT 1 After trying sudo aptitude install apt, I get the following, 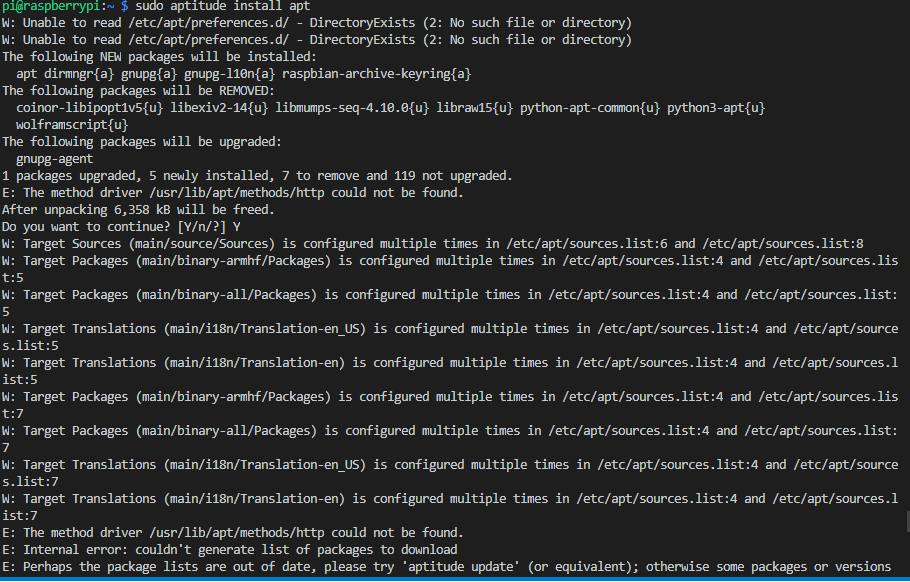 I tried the following afterward

Removing gnupg should not have affected whether apt and apt-get are installed, though removing some libraries may stop them working correctly.

Possible solutions depend on what you have installed:-

If you use an install disc, make sure you down-load the latest for the release you are running.

There may be other solutions (such as using chroot to address your installed system from a booted install disc), but without understanding how apt* were lost, I am reluctant to suggest more.

Not the answer you're looking for? Browse other questions tagged linux ubuntu bash raspberry-pi or ask your own question.

0
How to solve "signatures couldn't be verified" when running "sudo apt-get update"?
8
apt error: Could not perform immediate configuration on
3
Authenticating and adding public key for apt
13
Setting up PostgreSQL gives error sudo: initdb: command not found
3
Errors when updating package list with apt-get on (K)ubuntu
1
sudo apt-get install -y liblog4cxx10-dev failed
5
Kali Linux Rolling - apt-get upgrade: failed to fetch 404 not found
0
Error in apt-get update - how to remove module - The following signatures couldn't be verified because the public key is not available