This may be a silly question, and I think I have looked elsewhere to find the answer... Might be a path issue, but when I open the command line and type from the C:\>: 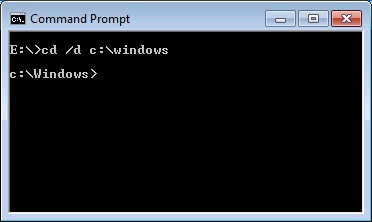 to do this. You can specify paths also.

Instead try pressing Windows+R and search for cmd, it takes to C:\> drive. From there you can navigate to D:\> or anywhere you need

I tried several commands the some worked, while others didn't. What I stumbled across is by trying yo shorten this command cd /d d:, I simple removed the cd /d and just use the D: to access the correct drive.