What does the “mux” option in VLC media player do?

When I use VLC media player to stream a video file with the command line, I have to tell, what kind of "mux" I prefer:

What does mux mean? What is done by muxing/multiplexing the video data?

The video file I am streaming has an H264(AVC) video stream and an AAC audio codec. It is saved in the .mp4 container format.

What is the multiplexer doing with it? Is it just changing the container format?

As you have identified, a "video" is typically actually both audio and video. They do not usually come together, but rather exist as separate entities - in your case H.264 and AAC.

One option is indeed to have two separate files on disk, which you play independantly - this is often how Digital Cinema content is distributed.

It'll produce the same experience for the end user, but there will be a number of issues:

In order to address these issues, you can multiplex the two (or more) streams into one stream... enter the concept of a "Container". In this context, the term is somewhat synonymous with a "Mux" or "Multiplexer".

One could argue that the "multiplexer" is the logical block (code) that deals with splitting or merging the streams, while the "container format" is the way the data is prepared and formatted for storage or transmission.

At a more fundamental electronics level, a multiplexer will simply put one signal on a transmission line at a time.

There are a load of different containers which have different features and benefits. Key features of a container include:

Often however, it's also possible to store any arbitary binary data in another stream within the container. For example Matroska is an incredibly open format that can support virtually anything.

When you say that you have an .mp4 file, you might not actually referring to the container format - generally, so long as you can get the correct application to handle the data, that application will understand what it's looking at and process it accordingly.

The reason that this still works is either:

What does mux mean? What is done by muxing/multiplexing the video data?

Hopefully I've largely covered this above.

The reason you need to give the --sout '#http{mux=...}' parameter is likely because VLC will demux the file before preparing it for streaming. Some container formats don't support streaming well or at all (e.g: AVI), so this makes sense - you now have the option to use a more suitable container. Transport Stream is a good candidate, and it's well understood so many devices (e.g: TVs) will be able to deal with it. 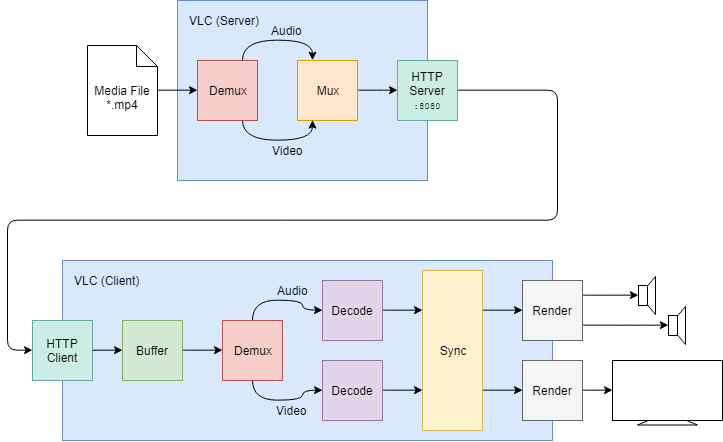 What is the multiplexer doing with it?

The multiplexer is separating the interesting streams from the overall stream, and feeding them into their own decode and render pipelines.

Is it just changing the container format?

If you're referring to your --sout '#http{mux=...}' parameter, then yes (sorry, for my original mistake)... As mentioned above, the file will be in a format... but that format doesn't necessarily stream well. This will permit you to change the container to facilitate streaming, or a particular device's feature set.

Why can I use either flv-muxing or ts-muxing and my video is streamed without problems either way?

Why can I change the filename from mp4 to ts?

Because magic looks at the data in the file to establish what it is - on Unix systems the file extension is merely a hint for people to use.

How can I check the file's actual container format?

Use the file utility - this uses magic to identify (fingerprint) the file and tells you it's best guess. For example, This file uses the QuickTime container:

If you want to know more than just how the data is contained - e.g: what streams are in the file, or what codecs are used - then you'll need to inspect the file using VLC, GStreamer, FFmpeg, or another tool. For example it has three streams:

Why is it necessary to multiplex the file in order to stream via VLC?

I think I've covered this already, but just to be clear... this permits flexibility. The demux / mux operations are fairly lightweight (when compared to full decode), so doing this as a matter of course isn't really an issue.

If you were to try to serve an AVI file without remuxing it, you'd have significant issues trying to decode it at the client (it most likely wouldn't work at all).

Equally if you were targeting a device which is only able to demux a Transport Stream, then remuxing from MP4 to TS would allow the media to be decoded non that device.

Not the answer you're looking for? Browse other questions tagged video vlc-media-player streaming multiplexing or ask your own question.