The problem I have is that I can't install the 2018-08 Cumulative update (KB4346783). Every time I restart to install the update I get the typica 'please wait while Windows installs updates' screen with the circling dots, my PC restarts, then I get an icon in the system tray telling me that my devise is missing important updates. I check the Update History and I see 'Last failed install attempt on ‎2018-‎09-‎06 - 0x80073712' (see below). 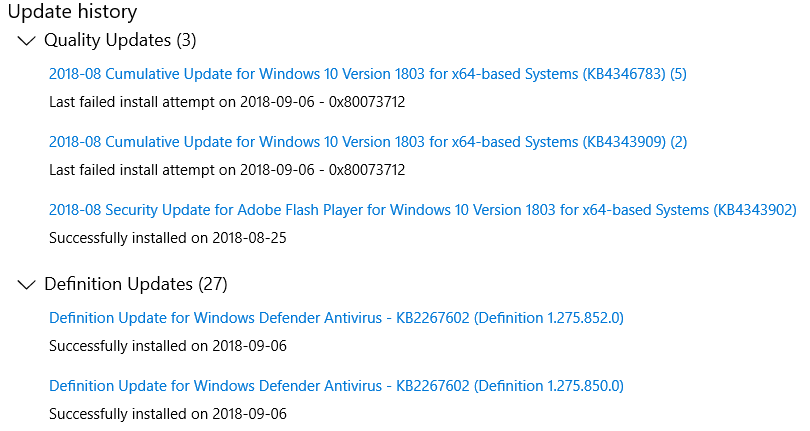 I've already tried a couple of steps to fix the problem with no success. I've tried using a clean boot (that is, I followed the instructions here). I then tried running the Windows Update Troubleshooter (from Update and Security > Troubleshoot). It reports 'Potential Windows Update Database error detected (fixed)', 'Windows Update components must be repaired (fixed)', 'Check for pending updates (fixed)'. Then I let Windows re-download the update and restart to install it. Same result as before - 'Your device is missing important security and quality fixes.' When I run the Update Troubleshooter again after restarting, it finds and fixes the same issues.

Edit4: So I ran DISM and SFC as suggested by Ramhound. Logs are here and here. DISM got to 84 % then quit with the error 'Error: 0x800f081f The source files could not be found.' SFC reports 'Windows Resource Protection did not find any integrity violations.' Running wmic qfe list lists only two updates installed, KB4343669 and KB4343902. I'm going to pause updates until next month, unless someone has a better idea.

You can try to download the Windows installation tool which will be started as a normal application. https://support.microsoft.com/en-ca/help/15088/windows-10-create-installation-media

Not the answer you're looking for? Browse other questions tagged windows windows-10 windows-update updates or ask your own question.