Why does my Linux system stutter unless I continuously drop caches?

Over the past few months, I've had an extremely irritating problem with my Linux system: it stutters on Firefox audio playback, mouse movement, etc., with a tiny sub-second (but still noticeable) stutter every few seconds. The issue worsens as the memory cache fills, or when I have highly disk/memory intensive programs running (e.g. backup software restic). However, when the cache isn't full (e.g. under very light load), everything runs very smoothly.

Looking through perf top output, I see that list_lru_count_one has high overhead (~20%) during these periods of lag. htop also shows kswapd0 using 50-90% CPU (though it feels like the impact is much greater than that). During times of extreme lag, the htop CPU meter is often dominated by kernel CPU usage.

The only workaround I've found is either force the kernel to keep free memory (sysctl -w vm.min_free_kbytes=1024000) or to continuously drop memory caches through echo 3 > /proc/sys/vm/drop_caches. Neither is ideal, of course, and neither completely solves the stuttering either; it only makes it less frequent.

Does anyone have any ideas on why this might be occurring?

EDIT: For clarity, here's a picture of htop and perf during such a lag spike. Note the high list_lru_count_one CPU load and the kswapd0 + high kernel CPU usage. 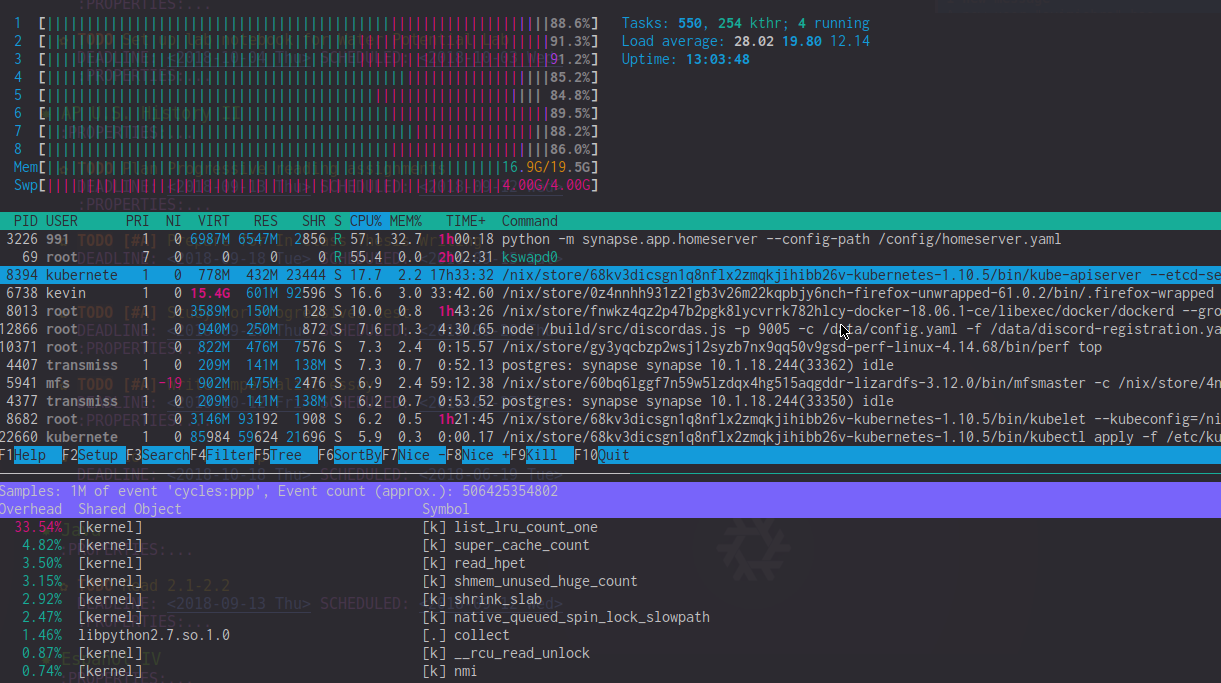 It sounds like you've already tried many of the things I would have suggested at first (tweaking swap configuration, changing I/O schedulers, etc).

Aside from what you've already tried changing, I would suggest looking into changing the somewhat brain-dead defaults for the VM writeback behavior. This is managed by the following six sysctl values:

So, with the default values, every tenth of a second, the kernel will do the following:

So, it should be pretty easy to see why the default values may be causing issues for you, because your system might be trying to write out up to 4 gigabytes of data to persistent storage every tenth of a second.

The general consensus these days is to adjust vm.dirty_ratio to be 1% of RAM, and vm.dirty_background_ratio to be 2%, which for systems with less than about 64GB of RAM results in behavior equivalent to what was originally intended.

Some other things to look into:

The issue has been found!

It turns out it's a performance issue in Linux's memory reclaimer when there are a large number of containers/memory cgroups. (Disclaimer: my explanation might be flawed, I'm not a kernel dev.) The issue has been fixed in 4.19-rc1+ in this patch set:

This patcheset solves the problem with slow shrink_slab() occuring on the machines having many shrinkers and memory cgroups (i.e., with many containers). The problem is complexity of shrink_slab() is O(n^2) and it grows too fast with the growth of containers numbers.

Let us have 200 containers, and every container has 10 mounts and 10 cgroups. All container tasks are isolated, and they don't touch foreign containers mounts.

My system was hit particularly hard, as I run a good number of containers, which likely was what was causing the issue to appear.

My troubleshooting steps, in case they are helpful to anyone facing similar issues:

Not the answer you're looking for? Browse other questions tagged linux memory performance cache or ask your own question.

5
Why are multiple levels of caches used in modern CPUs?
1
Does Polipo caches resources containing a query string?
5
Why is writing speed for RAM less than reading speed? And how do caches come into the picture?
1
How long does it take for Linux to drop caches?
1
Linux: reduce RAM used for disk caches etc
1
Sudden FPS drop/Stutter
1
How to drop memory caches in macOS?