Way to limit bandwidth of programs on Windows?

Is there a technique in Windows that can selectively limit bandwidth of a running process?

I use Net Limiter, which has a free version, but unfortunately you'll need to pay for the limitation feature. 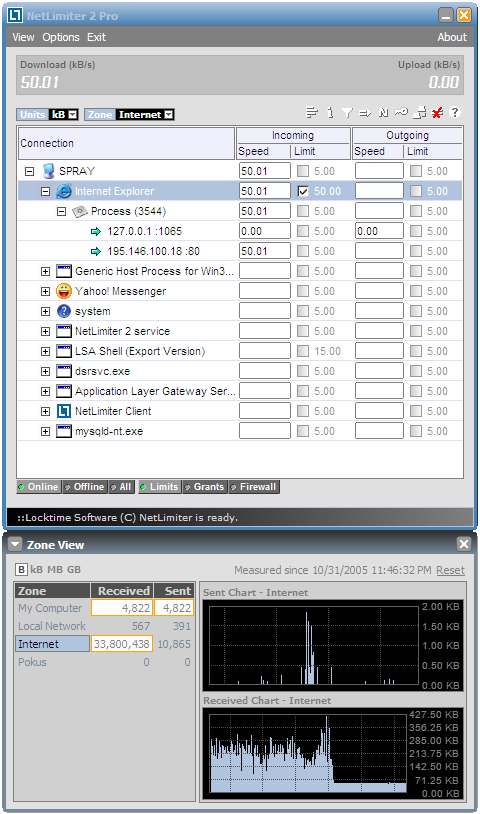 There are good reasons to look at the "Internet facing router" approach for managing a network as a whole - however as the original question was specific and the user may very well be the only computer on the network, that is a secondary concern.

Per one of the other top answers, for a while I tested out NetBalancer. It works really well - and is easy to configure.

NetBalancer is available for purchase on their web page for about $50. The trial/free version allows you to monitor connections - but does not allow throttling.

The alternative is NetLimiter. It has a free trial period - but starts at ~$20 for the Lite version or ~$30 for the Pro version. NetLimiter is the tried-and-tested go-to application for many SysAdmins.

When NetLimiter's trial ends, until you buy a license, it becomes a monitoring-only tool - and no longer supports throttling. This can still be useful - but not for this use case.

Using a Router (with an explanation of why this isn't a good approach to this use case).

Though using a smart/highly-configurable router is usually the better approach to wholistic network management, the disconnect between that and the original question is not explained in other answers. The original question is specifically asking about a process - which a router has no way reliably to identify.

The one variation that is close to useful on this end is if an application only communicates over a specific channel or type of traffic that easily can be identified by the router. An example below is of how EA's Origin downloads worked at one point:

Origin presently uses Akamai. Typically I set automatic downloads/updates to run at any time - but I'd prefer that it not use all the line capacity while I'm busy doing other more important things. Origin happens to be very bad at this sort of thing, thus it doesn't support download schedules or download throttling. Currently my desktop is downloading a game using the server "a1750.d.akamai.net". A MikroTik router (an example of a smart router) can take note that this DNS name was used (it will be in the DNS cache with an IP address) and can be configured temporarily to add the destination server's IP address to an "address list". All traffic to/from the address list can be added to a throttled queue thereby, technically, throttling a single application.

The approach above is naive however. EA could at any time change the server name, the protocol used, or another unrelated service using the Akamai infrastructure could be inadvertently throttled. Now my rule is useless and broken or, worse, is throttling something unrelated.

You can use Windows Group Policy to throttle the bandwidth of any process. Go to:

Here you can see the current policies and create new ones by:

The wizard allows you to create a policy to throttle bandwidth for either:

And your policies can then be filtered by:

You can also create these policies in Powershell by running:

Although this might require administrator rights, and there seems to be a bug where policies created like this will not appear in the GUI.

Here is my poor mans throttling:

It does not exactly limit the bandwith, it rather suspends/resume the bandwidth eating process and thus frees some bandwidth for other applications. And it's free!

You need PsSuspend.exe (I put this file into C:\tools\sysinternals) and a batch file (e.g.) slow.bat:

If you are done, hit CTRL-C and cancel the batch.

The many steps to configure it for throttling can be found e.g. here: https://www.howtogeek.com/347711/how-to-limit-any-applications-bandwidth-on-windows/

Not the answer you're looking for? Browse other questions tagged windows bandwidth or ask your own question.

2
Is there a way in Windows 7 to throttle a program's bandwidth?
1
How to limit download speed of a task?
1
Is it possible to place a bandwidth limit on a Windows computer?
4
How to limit my Windows network transfer rate?
2
How can I prevent uploading large files crippling my home internet connection?
0
How do I stop certain programs getting network priority without using QoS?
0
How to Controll The Internet Usage For Each Application
1
Automatic connection switch-over between two USB 3G dongles when transfer cap is reached?
1
How can I limit my data usage over tethering on Windows?