What are the differences between Ethernet Controller and Network Controller?

I have a desktop computer which is not much famous brand "E-tel iPC" and I installed Windows 2008 R2 Standard Edition on that machine.

When I go to the Device Manager I can see Ethernet Controller and Network Controller as follows in Other Devices and please advise. 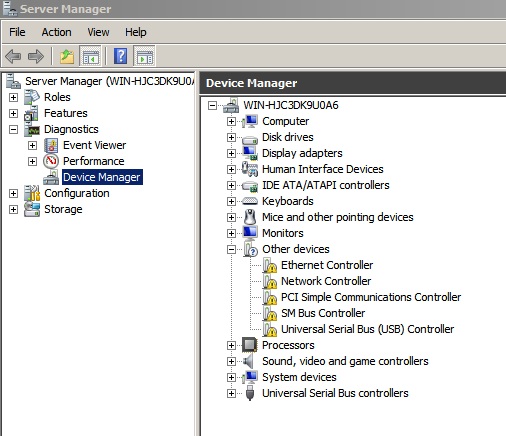 What are the main differences between them ?

PCI devices report their class and subclass among other parameters (for recognition before the OS figures out which driver to use for them). The device class 0x02 "Network controller" has these subclasses:

When the initial list of subclasses was decided on, Ethernet was a fairly popular communications technology and got its own subclass from day one. But Wi-Fi came around quite a bit later – since it didn't have a dedicated subclass in this list, many Wi-Fi adapters simply use the 0x80 "Other network controller" subclass.

In PCI 3.0 there is a 0x0D "Wireless controller" class with subclasses more suitable for Wi-Fi:

Presumably a modern dual 2.4 & 5 GHz adapter could flip a coin to choose between 0x20 or 0x21, or it could classify itself as 0x80 "some other subtype" again.

But because the class & subclass aren't really used for much else except OS driver lookup, it appears that many manufacturers never saw any reason to switch from the good old 0x0280 "Network controller: Other" device class.

0
Ethernet and Wireless Driver problems on Sony Vaio VGN-NS20S
2
Installing ethernet controller driver after clean windows XP install
0
Intel 82801G ethernet controller driver for Windows 7 32 bit
0
Network bridge Guest Wifi and Ethernet LAN
1
Are the communication protocols too different between USB and Ethernet?
1
What is the difference between using a router and connecting a PC straight into the wall socket?