The problem is, when I execute this code:

It shows that a lot of files that are identical but with different encoding will be synced, and I only want to sync the different content files.

With diff, it is possible to do this:

But I could not find anything like this for Rsync. How can I sync only the files with different content?

There is no option to ignore line endings for rsync

As you have found out, rsync considers files with differing line endings to be different. This is inconvenient in your situation because the files are visually/semantically the same.

rsync decides what to sync in a file based on checksums on blocks. There is a good overview on this:

The new file is then searched byte for byte for blocks with checksums matching those in the old version. Here is a diagram illustrating this process: 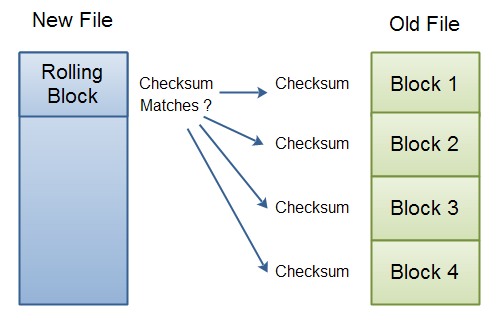 Repeating these operations on the new version of the file you will iterate through the file byte for byte. During this iteration you will find two types of data in the file:

If you are interested, the next section is on the checksums used. However, the main point of the checksum is that it works on bytes, and your files have different bytes because of the line endings. As such, rsync is correctly detecting that they are different and so is transferring them.

The best say to do this is to make sure all your files have consistent line endings, or sanitise them, as Kamil suggested in the comments.

How you do this is up to you. You might decide that you will make the change when the files are generated, edited or updated. Or you could do it as a pre-transfer step.

Apply the sanitisation to only the files needed

If you do sanitise, make sure you do not apply it blindly, as Kamil further warns:

One shouldn't use any conversion tool blindly on all files. Even if the tool tries to guess if a file is text or binary, it's only heuristics. CRLF may appear inside a binary file; blocks that look like text may appear as well. Modifying a binary file by removing some bytes will most probably corrupt it.

For example, if you have files in the two directories that you know are text files which need to be sanitised, apply the sanitisation step to that subset only.

Which tool should I use to change the endings?

A full solution is beyond the scope of this answer. There are several suggestions over on this SO QA, including dos2unix, tr, sed, awk, perl.

You can use tr to convert from DOS to Unix; however, you can only do this safely if CR appears in your file only as the first byte of a CRLF byte pair. This is usually the case. You then use:

However, if you're going to have to do this very often (more than once, roughly speaking), it is far more sensible to install the conversion programs (e.g. dos2unix and unix2dos, or perhaps dtou and utod) and use them.

Do bear in mind the above warning when using any of those tools, however.

Not the answer you're looking for? Browse other questions tagged linux rsync diff or ask your own question.

6
rsync synchronizing files only without creating folders on destination
10
Sorting XML files so that differences can then be found
1
Compare two file systems between Solaris and Linux
1
comparing two directories and getting the output with absolute path
2
Why does rsync not create a hard link in my Backup Set?
1
linux - append but skip existing data
0
How to list files in a specific order according to directory in bash?
1
Permissions on directories when extracting tar built from a list of files