Two monitors: pointer sometimes gets slightly stuck on the edge on one monitor

Recently switched from one to two monitor setup in Windows 10. Sometimes, pointer gets stuck on the edge of one monitor (always the same) and I need to really insist by making huge moves to make the pointer finally cross over to the other monitor.

The weird thing is it seems to happen randomly, most of the time it doesn't occur.

Here is an example of a two monitor setting under Windows 10. If you are on the lower right corner of screen 1 (anywhere in the red area) you wont be able to move to the second screen. You will have to move the mouse pointer further up - out of the red area - in order to move to the 2nd monitor: 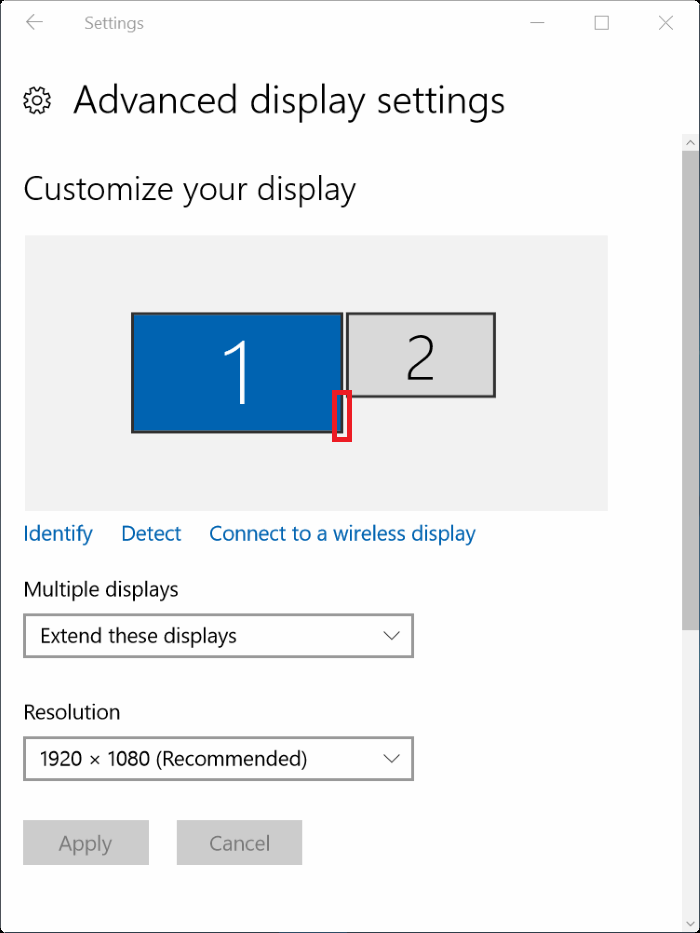 It's not random, nor is it a display alignment issue. It's actually a 'feature' of Windows 10.

Note: If you want to be able to see for yourself that it is or isn't a display alignment issue, try moving your mouse at an angle so that the cursor 'rubs' against the edge of the display area as it crosses from one monitor to the other, then try doing the same thing again, but going from the second monitor back to the first. If it works in one direction but not the other, it's imperfect alignment, if both directions stop at the corner, it's due to this new feature in Windows.

The feature I'm referring to is the fact that on Windows 10 moving your cursor from one physical monitor to another will be prevented if the cursor is close enough to the edge of the display area that it thinks you might actually be aiming for the corner of that monitor, instead of trying to get your cursor onto the other monitor. In my experience the threshold appears to be about 5 or so pixels.

I'm unaware of a way to disable this feature (if someone does know of a way, please post some info), however once you're aware of what's actually happening, it's fairly easy to simply move your cursor a little further from the edge of the screen to get around this virtual 'bump'.

Personally, at this point in my Multi-Monitor Windows 10 usage, I'm unsure if I like or dislike this feature, but it would be nice to have the option to disable it if desired.

Let me write my trouble; I've got three screens 1-2 horizontally and 3rd is vertical to them. My trouble is my pointer can access from 1-3 and 2-3 easily, but horizontal 1-2 edge there was a rigid line at the edge so that you must accelerate pointer to be able to pass to 1-2 edge. Finally I realized to do that there was a thick gap between 1-2 in the plan at the monitor arrangements at the display setting area. And I tried to make them closer at that screen and re-apply the arrangement and my problem, 1-2 hard edge behavior has been disappeared!

I had the same issue and I figured it out. I have a Mac. In System Preferences, Display: when setting the arrangement of the 2 monitors, make sure that the borders of the monitors are touching each other. That should fix the issue. If there is a gap, then you will have issue.

It's unlikely to be random.

In any multi-monitor setup, what you see & what the computer sees are two different things.

Pics from a 3-monitor setup, but the same rules apply

What you see is 2 [or 3] monitors of the same size - you don't really care about the resolution of each.

What the computer sees, however, is only the resolution of each - it cannot see their physical size. So if they have different resolutions, the computer considers them to be different sizes & you cannot pass from one to the other where there is no screen.

So to move your cursor from one to another, you need to leave one monitor in an area where the next monitor exists to the computer, not your eyes.

Some operating systems will allow you to change the precise area where they meet, so you could for instance set the tops in line, rather than the centres.

I had the same issue and I use the Software DisplayFusion, it has the Feature Prevent mouse cursor from snagging on unaligned monitor edges, search for it in the help: https://www.displayfusion.com/Help/?Version=9.3.99.103#settings-mousemanagement

It's sad that the free edition does not offer this function, search for Prevent mouse from snagging on unaligned screen edges: https://www.displayfusion.com/Compare/

But DisplayFusion is very useful and they maintain the Software, so I've got many new features and functions since I bought the license :-)

I was having this problem and went into 'Display settings' and rearranged the screens. After clicking 'Apply' the problem went away.

You probably have 2 different monitors. In screen settings (right click on desktop, and option at the end), drag your monitor 2 a little bit up. Now you can slide with mouse on the bottom side. It feels natural (and more often) to slide using bottom side, than using upper side.

After I dragged it

OK, I had this same exact issue. It's like there was an invisible barrier between the monitors that the mouse would not cross unless I moved the cursor to the far side of the monitor and "slammed" the cursor thru the barrier. I fixed it In display settings make sure you have the monitor 1 on the actual side that monitor 1 is physically located in your set up and the same for monitor 2. That seems to have fixed the issue for me.

jeffjeff
1
1
Add a comment  |
Highly active question. Earn 10 reputation (not counting the association bonus) in order to answer this question. The reputation requirement helps protect this question from spam and non-answer activity.

Not the answer you're looking for? Browse other questions tagged windows-10 multiple-monitors mouse or ask your own question.

144
How to disable sticky corners in Windows 10

0
Windows XP over two monitors, but one of them switches off at boot... how to fix? How to switch back to one monitor?
0
What could cause a dual-monitor PC to suddenly stop using one of the screens?
1
How to stop my mouse cursor from going out of the screen?
5
How can I get mouse capture to work in virtualbox when I move guest window to second monitor?
0
How to use one monitor with two computers?
1
Two identical external monitors, one having hardware detection issues, but working in one specific setup
0
How to correct a Windows 10 mouse pointer that hides during logon and also behind the Start menu and the taskbar?
4
Four monitors || Windows 10: mouse pointers stick to horizontal edge
0
Mouse cursor hotspot offset from visible cursor location