CPU Does not run at full speed

I've been experiencing a problem with my processor's speed lately. The CPU is running 797MHz, instead of it's full performance. In the past, it's been running well, until yesterday when it suddenly became slow.

What I already tried:

Because of that, the CPU is unable to really heat up even during a stress test. It also stays at this slow state during a stress test and full load. During a stress test, one would usually expect the temperature to rise and the fans to speed up, yet it doesn't happen. The issue is making the computer quite slow. Basically, the cpu is somehow limited.

Here are some screenshots: CPU-Z + HWInfo; The BIOS

The processor is Intel Core i7-2820QM; the computer is Alienware M18X R1 Laptop running Windows 10. Warranty is expired. I am using integrated graphics.

Why is the CPU unable to run at full speed and how do I fix this? Should I increase the bus clock frequency? The PWR limits?

As a first test, you could run the Intel® Processor Diagnostic Tool, although I don't really expect it to find anything.

Second, have you opened your computer lately? There a switch on the motherboard which tell the CPU to always run at the lowest speed. This switch is called Slow mode or LN2 Slow Mode or OC Trigger Switch (TGR) or else. You might find its description in your motherboard's manual. It is sometimes situated right next to the power reset button. Even if it on the right position, sometimes just moving it between positions corrects the problem.

There might also be BIOS settings that disable the CPU thermal monitoring if it became defective. These might be called EIST and/or Intel Adaptive Thermal Monitor. If this helps then something is wrong with your motherboard.

Another such setting is BD PROCHOT (Bi-directional Processor Hot), an emergency throttling system that is used when a CPU hits its maximum temperature. To disable it temporarily, download ThrottleStop to check on and disable BD PROCHOT. ThrottleStop when running can also correct several types of CPU throttling. Again, if this helps then something is wrong with your motherboard. 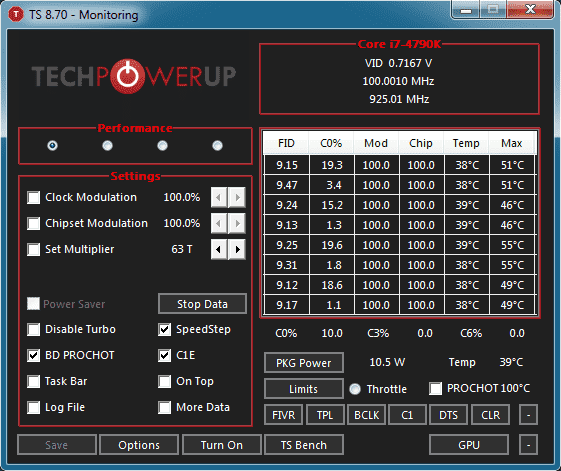 Not the answer you're looking for? Browse other questions tagged laptop cpu performance bios power or ask your own question.

4
My processor is running slower than usually it should run
3
Why does my laptop's CPU intermittently run REALLY slow?
0
Windows 10 task manager CPU clock speed exceeds displayed maximum clock speed?
2
Dell E7440 CPU frequency does not rise above 1GHz
4
Windows 10 throttling CPU to dead slow
0
CPU speed much lower than base speed
2
Why Windows 10 locks processor's base frequency to 2.39Ghz when i have 3Ghz cpu?